in DC: the sounds of hot monkey lovin’ 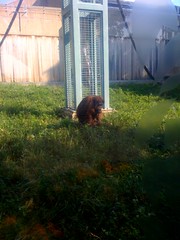 I was up early and decided I needed to shift my ass and take a walk through the zoo. When I map it out, it comes to about 3 miles through and back which may not sound like a long way, but to an out-of-shape nerd like myself, it’s enough to get my heart rate up and work up a little sweat — especially in this humidity. I definitely prefer this walk in the cooler months.

Not too many animals were out, probably because it was early and felt a bit hot. I noticed other zoo walkers and we kept crossing paths, but a noise made us all divert and end up in the same spot. The white-cheeked gibbons were very active and making a heck of a noise. It was so constant and high-pitched that it sounded like a car alarm or a siren, pretty fascinating. The other animals I saw were out on the move, usually towards water: ostrich, wallabies, prairie dogs. On the new Asia Trail I spotted the clouded leopards, Asian small-clawed otters and giant pandas. With the pandas, the crowd is infinitely more fun to watch though the beasts had the right idea. One was snoozing away and the other was sat down and stuffing its face and mugging for the gaping tourists. On the way back out I finally got to see an orangutan using the O-Line. Then it walked over to the edge of its enclosure and stared at me. Of course I’ve been in a bar when groups of gays make their rounds, staring at the patrons, so I guess I know how it feels to have people walking past and talking about it to themselves all the time.

Got nothing planned for the rest of the day, I’m not even really feeling shopping though the siren song of the mini mega mall down the road is tempting. I wish they’d moved an Old Navy over there tho, I could use some cheap polos and tees. But I need to clean around the apartment since I’ve moved some things around and there’s a bit of tech and wires all in the middle of the floor. Looks to be a lovely day, though I wouldn’t mind that thunderstorm rolling through later on. Lately it seems to take the humidity away with it, at least for a few hours. 😀