I myself would say that it had merely been detected.

Perhaps, after all, America never has been discovered. I myself would say that it had merely been detected.

It’s actually been a pretty productive weekend, though for a lot of Saturday and Sunday I was down with migraines. I’ve learned to function with them, but it makes it hard to get too much stuff done. I was able to manage a lot of picking up and throwing out trash, and got a first attempt at a sweet potato pie baked. It tastes yummy, but doesn’t have the look I want. Probably because it used dark brown instead of light brown sugar, so I’ll have to try some other variations… tasty, tasty variations. 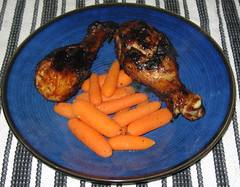 Since I picked up some chicken drumsticks at the store, I wanted to do something new with them. I thought that barbecue would be nice, but since I don’t have a real grill, brining came forth as an excellent method to not only give them some flavor but also get that nicely charred and caramelized skin before basting them with the sauce. This was definitely the easiest brine and one of the fastest I’ve used, only sitting in the fridge for about 4 hours or so before cooking. I’m pleased with the results, but I’d like to try this with chicken breasts to see if I get similar results.

After some early morning puttering around the house, I headed out for a little shopping and stocked up on more dress shirts. Having a Marshall’s down the street is both dangerous and convenient but this morning it was definitely handy. I’ve been a bit more of a bum today aside from listening to last week’s episode of This American Life at James’ suggestion. It’s about the economy and the hosts do a fairly good job of tracking the details behind what happened and why it happened. Even if it’s all been a mystery to you, this would be a good show to listen to.

One really good question to an expert from Ira was the sentiment: I’m not mad at the people who’ve been making money for the past few years. I still want people to make money, I just don’t want to pay for their mistakes. That pretty much sums up how I feel about it, it’s a good listen.

Back to the grind tomorrow, but thankful for a short week!