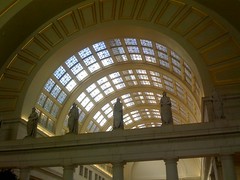 My current work machine is off getting a lobotomy, so I’m on a loaner. It’s slow, got nearly no memory and doesn’t even have all of the applications I need to do my job. Needless to say, it’s been a fun morning.

I caught up a little bit on Mad Men yesterday and was reminded of the Redskins Predictor. It’s no longer 100%, but still 17 out of the last 18 elections is nothing to sneeze at. I’ve polled my co-workers and apparently losing to the Steelers wouldn’t be so bad, but we’ll see what happens tonight and if the pattern of predication begins again.

I’ve also been asking co-workers if they’ve voted and when they plan to vote, just to see when people will be around. I’m going to try in the morning, a few of my clients are taking the day off and teleworking so they can catch the “less busy” times at the polls, but it seems more are still going for the late afternoon/evening times. I find it amusing that we’ve clearly had such voter apathy in past years that polling stations are worried about an actual near-full voter turnout on Election Day.

And as encouragement to get to the polls tomorrow, if you haven’t already, here’s a wildly inappropriate parody of Schoolhouse Rock that teaches you how to vote: