Union Station: Walk It Out! 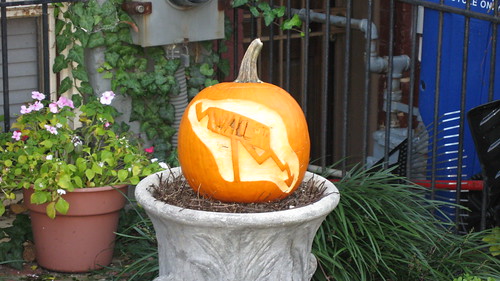 Another full day yesterday, met James, Michael and Fredo at Union Station and we took in the area, generally allowing our wanderlust to take us around. I was pleasantly surprised to see a Fantom Comics in one of the retail spots. I don’t often head over that way since once you get past the picturesque parts of the station, it’s more or less a mall and food court.

We grabbed some pics of the area and generally chatted and caught up while we walked around. Stopped in for coffee at Jacob’s and enjoyed time geeking out all playing on Brightkite. We spotted some well-done pumpkins and a few smashed remains and covered a good bit of ground before heading back to the metro and riding over to Dupont Circle. A welcome break was found with some Minestrone at Dupont Italian Kitchen before I realized that time was quickly ticking away and I was running a wee bit late to head back home and meet Kyle to head out to a housewarming party that evening.

I bid the boys farewell, focused all of my Metrobus Qi and Karma and didn’t have to wait too long for a bus home. It was just barely enough time for a shower and change and sorting out a way to transport a 10-inch cheesecake across town. Kyle and I also had quite good Metrorail Karma and made it over to Eastern Market in about a ½-hour, which is pretty good for a weekend evening and single-tracking in some spots. Paul and Al’s place is lovely, but I already knew that having been over a few times before last night for movies and what-not, but it holds a gathering quite well too. I met some fun people, had some lovely drinks and a not-so-lovely shot of Absolut LA. Turns out that an aromatic blend of Acai, Acerola, Pomegranate, and Blueberry isn’t really all that great straight up, but I’m sure it makes a lovely cocktail.

Sadly, my cheesecake didn’t make it out for guests, but I happily cut into it this morning to go with my coffee. I’m definitely going to have to freeze or give away chunks of this thing since finishing it on my seems like a daunting task to a guy that’s at least pretending to watch his weight. 😉