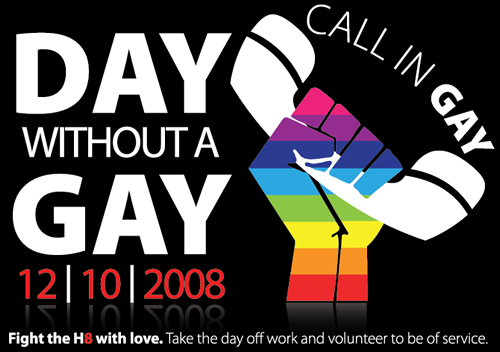 Day Without A Gay, huh? The story in the Chicago Tribune says it best, The HR office has probably never encountered this before.

Day Without A Gay seeks to shift our strong feelings about injustice toward service! Let’s fight for equality by out-loving those who would deny us rights. Call in “gay” on December 10th (International Human Rights Day) and volunteer for your local LGBT and/or human rights organizations.

Back in the day when gay/lesbian comedians were still a bit of a novelty on television–this was before Logo–there was a woman that told a joke about homosexuality being called an illness. The obvious punchline being that you could call into work, “Hey, I won’t make it in today. Yeah, still gay, sorry.” I personally have called in hungover as a result of drinking too much in a gay bar with other queers, but I don’t think that’s quite the same thing.

I agree with the sentiment and the purpose, but I don’t think it’s a very good idea to just call in gay. For one thing, many places in D.C. would completely shut down! As someone with a strong work ethic, I don’t call out as part of a protest when my company doesn’t even have a stake in the protest. The co-workers that I actually enjoy talking with already know my feelings regarding Prop 8 and the subsequent protests. Besides, right now there’s just too much work on at the office to call in gay. I have no doubt that my office recognizes just how much this one queer would be missed if they shipped us all off to an island.

So… who did call in gay today?

Tags: blogDay Without A Gaygayprotestqueer