I almost never get out to see movies anymore, not really sure why that is. Either its the cost or the reviews or lack of real interest when it comes right down to it. I’m usually fine picking it up on Netflix or waiting until it shows up on cable, but this post by Michael makes me think I should really head out and see Milk: 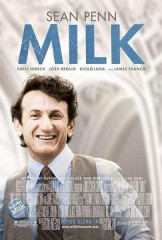 By the time I was halfway through the movie, I was hooked, and very emotionally invested in the people, always wondering what was going to happen next. When I saw Anita Bryant show up on the screen and start in with her right wing religious bullshit, I actually growled a little bit without even consciously thinking about it. No one has gotten me to react like that before.

I haven’t read any reviews yet to see how the scales balance between historical, drama and biopic for the film, but it’s hard to deny the relevance of retelling the story, especially lately. As I mentioned before, history is not my thing, but for events that took place within my lifetime/youth, I do try to learn as much as I can about them. Sad fact is that before I was 8 or so, I was unaware and after that I just didn’t much care about anything happening beyond my backyard. Ask me anything about the Atlanta Child Murders and I can go on at length. Watergate tho? I got nothing.

Since the film broke through from limited to expanded release, it will be a lot easier to catch. I just doubt that I’ll be able to catch it over the Xmas break–a quick check of theaters in South Carolina confirms that… wonder why? 😉 But it could make a good treat for myself when I return.