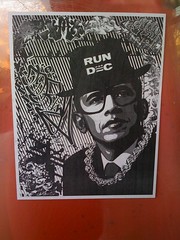 Are you ready for some Inauguration!? I do wish I’d known about the parade rehearsal as that would have been interesting to see and about as close as I wish to get to any of that nonsense. Though apparently even it didn’t go completely without a hitch:

The D.C. Department of Transportation sent out a general media traffic advisory about the closure of Pennsylvania Avenue for the parade practice run. But the fact that large parts of Constitution and Independence Avenues would be shut down was not made public.

When asked about those closings, DDOT told WTOP to contact the D.C. Police, the Secret Service and Mayor Adrian Fenty’s office. The Mayor’s Office in turn referred WTOP back to DDOT.

For the few minutes I still had FOX on after watching 24, they had a story where people were complaining that they still don’t know what’s going to be open or closed, but even more people seem to be concerned that they won’t be able to get to work at all. Not everyone in DC works for the gov’t or in IT and has the luxury of the day off or teleworking.

The U.S. Secret Service’s Inaugural Page contains a road closings map dated Jan. 7 and looks to have pretty full information. From looking at the map and the listed closings, it’ll be less confusion and more frustration. I’m glad I don’t drive or have to be anywhere that day.

* For Roman soldiers, to gird one’s loins was to draw-up and tie your lower garment between your legs as to increase your mobility and agility. I can think of no better warning to DC residents for the days ahead.