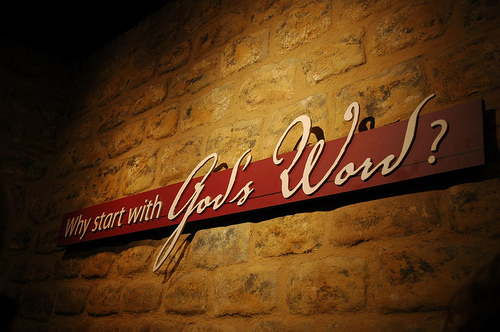 A very good question, posed by the Creation Museum. Blogger John Scalzi took a visit there and shares a great photo tour as well as writing up quite the report on his visit. I had to stop reading and looking at the photos as my laughter threatened to summon over co-workers to look over my shoulder.

His views, which may or may not reflect mine*, are hilarious… and a little bit blue.

Here’s how to understand the Creation Museum:

First, imagine, if you will, a load of horseshit. And we’re not talking just your average load of horseshit; no, we’re talking colossal load of horsehit. An epic load of horseshit. The kind of load of horseshit that has accreted over decades and has developed its own sort of ecosystem, from the flyblown chunks at the perimeter, down into the heated and decomposing center, generating explosive levels of methane as bacteria feast merrily on vintage, liquified crap. This is a Herculean load of horseshit, friends, the likes of which has not been seen since the days of Augeas.

* I am so not getting into that debate.