spam: ur (almost) doin it wrong 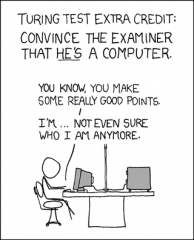 I’ve seen some pretty poorly done spam since moving to WordPress, but the following is about the most well-done I’m a real person and not a robot, I swear! spam comment I’ve gotten in a while:

Not that I’m totally impressed, but this is a lot more than I expected for when I stumpled upon a link on Digg telling that the info here is awesome. Thanks.

It has all the jerkishness inherent in internet comment boards, basically saying “Yeah, your site sucks, but it doesn’t suck quite that bad.” Clearly only a real person would express such a sentiment! Even better, a search on that phrase around the net shows many blogs that green-lit the comment, so it must be working!

After realizing that I’d gone my entire commute with my fly down, I needed a laugh this morning. But at least my pants were the same color as my trousers.*

* Yes, I’m using the British pronunciation for that sentence.