in DC: “I am a politician who is moral.”

I thought it would be enough to post this to Facebook, but I’m still shaking my head and laughing this morning. About 150 people rallied in Freedom Plaza outside D.C.’s City Hall to denounce support for same-sex marriage in the District. Before I even get to the articles/quotes, 150 people. That’s about the same number that showed up for the IMF/World Bank protests* and less, I think, than the number of people who were attending the Pillow Fights on the Mall and in Dupont Circle. Organizer Bishop Harry Jackson Jr. had predicted about 1,000 church members and 100 pastors would show up. Hm, maybe they were scared off by the heat. 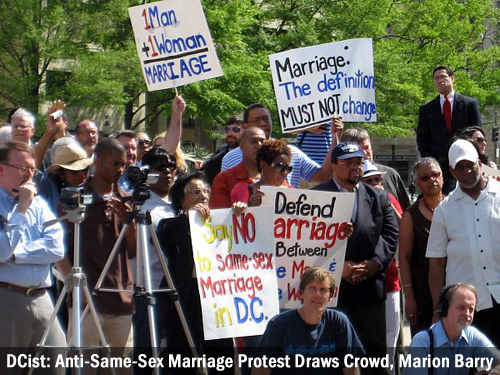 Some choice quotes from Jackson:

But the best of all comes from former mayor Marion Barry, now a D.C. council member:

Council member Marion Barry (D-Ward 8), a co-sponsor of the council bill to recognize same-sex marriages performed elsewhere, told the rally that he now opposes the bill. He later described his position as “evolving.”

Per DCist, he was not present for the council session where the bill passed unanimously in a preliminary vote.

* When Kyle and I were walking downtown on Sunday, we saw many cops looking bored off their asses. The chanting and sign-waving group we saw barely filled the park they were in.