You won’t get this kind of service and presentation at Starbucks, that’s for damn sure. Of course you won’t really get it in many coffee houses, but it was nice to see at the new Chinatown Coffee. It’s the latest venture from Nick Cho, most well-known as the potentially cockpunching manager* of now-closed Murky Coffee**.

The place is nice, if a little stark, and the coffee is excellent. I like that they ask you if you’re planning to stay or if you want your beverage to go, the difference being paper vs. ceramic. And their small, medium, large sizes are 8, 12 and 16 oz. None of this “venti/twenty” nonsense.

I met up with some friends and we had a good time chatting away for hours. The place didn’t really fill up, but it’s a little off the beaten path. Far enough away from the metro that you’d need to know where it was and likely hoping to appeal to the bunches of new condos/apartments along nearby Mass. Ave. I can’t say that I’d become a regular there just yet, but if I were in the area, I’d choose it over the Starbucks. I will say that the three of us were at one table and every other table behind us towards the back wall was filled with people whose faces were glued to their laptops. They offer free wifi, but I’d much rather see the place develop as a more of a coffeehouse than an internet cafe. 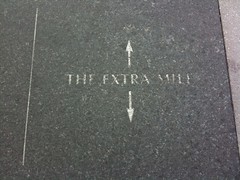 Earlier in the afternoon, James and I were at 14th & G and I saw this on the street. Not a clue what it was for since there was no business with that name or a historical marker nearby. Turns out it’s yet another DIY historical tour in DC: The Extra Mile

The Extra Mile — Points of Light Volunteer Pathway is a new national monument dedicated to the spirit of service in America.

Obviously I don’t walk around that part of town enough as I’ve never noticed these before, but I’ll add it to the list for a future walking tour. Just not anytime soon if we’re really expected to hit triple-digits this week.

* I won’t go into the complete Murky drama, but… 1. The incident. 2. The response from Murky. 3. The relocation, unrelated to the drama.

** I never actually had a cup of coffee from Murky. Every time I went in there the place was filled with students on laptops taking up every seat in the place. And the look they all gave you when you walked in without a laptop was brutal. Gods forbid you had a baby stroller… they probably brandished knives.