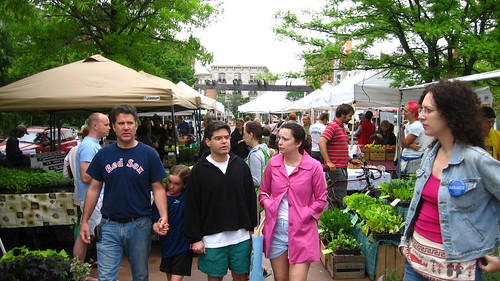 I don’t mean the title of this entry to sound hostile, but since becoming a huge farmers market fan I feel like the name is being abused. I enjoy going to a farmers market with produce stands, meats, cheeses, local producers knowledgeable about their wares. The local markets: Mt. Pleasant, 14 & U, Dupont Circle, Foggy Bottom and Penn Quarter have spoiled me rotten.

Now we used to have a “farmers market”–note the quotes–at my old workplace that was sort of ½ farmers/produce and ½ flea market with some local food vendors thrown in. Since moving to our new location, they still call it a farmers market, but there are maybe two stands selling produce and the rest are vintage clothes sellers, knock-off brand purses, jewelry, scented rock potpourri and once there was even someone selling electronics like no-name in-car GPS systems. We do have some “local” food vendors from time to time selling homemade cakes or blending smoothies on the spot, but it doesn’t feel like a farmers market. Still, since most of my co-workers probably don’t frequent the local markets, I suppose that it’s good enough for them.*

Since I’ll be calling this area my home soon, I was very excited to read on Prince of Petworth that a new evening-hours farmers market was opening soon. So last week I headed over there, figuring I’d take a few photos before going home to do more packing, but found nothing there.

Since I hadn’t personally seen any fliers or posters in the area, I figured something must have happened to move it back a bit. The market near the White House was opening the next day, so maybe they passed on it due to being overshadowed. NBC Washington confirmed that they had a hard time finding vendors so late in the season and that it was being pushed back a week to the 23rd.

Since there’s already a market on Tuesday afternoons, we weren’t really missing out on anything but I had hopes that this market would focus more on the food and less the random sundries. So I headed over there again after work this past Wednesday, camera at the ready, looking forward to seeing the new market. Unfortunately… not so much. 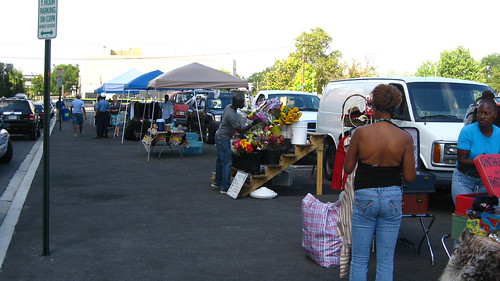 This is what I saw when I headed over. There was a vintage clothing stand, tea vendor, coffee vendor, flower stall and some more clothing further down the way. I didn’t see any signs of produce or farmers. As I whipped out a notebook and started chatting with the vendors, I noticed that some were packing up their wares while others kept looking down the block… at the two police officers.

After some more conversation and sampling some really good tea, I found out that the vendors had been told by the police to pack up their things and leave. The vintage clothing vendor said that it was something to do with not having the proper permits. Now they were set up right next to Canal Park along a walkway that’s usually traveled by stadium-goers on game nights, but their vehicles weren’t on the street, so they weren’t impeding traffic.

It looked like the two Capitol Riverfront representatives were busy dealing with the situation, so I didn’t get to speak to them about what was going on. Their website still had a link to the press release announcing a September 23rd date, so I’m not sure what was up. I e-mailed the listed contact for more information, but haven’t heard back from her yet.**

There were a few residents and workers stopping by the stands, but as it looked like a small market of about 6 or 7 stands, none of them local produce, I can’t call it the best opening day for the Fall Farmers Market. I hope they can sort out the difficulties and be ready for business next week. I’ll have moved in by then and will be looking forward to stocking up on fresh foods!

* From observing the shopping patterns, I often wonder if the farmers aren’t wasting their time showing up. More people would rather browse the mini-mall, than the farm stands.

** If I do hear back, I will be happy to post an update with new information.