First things first, the Afterglow happy hour is still on this evening at Againn from 5-7 (or thereabouts). It’s just going to be technically premature now, but still happening. 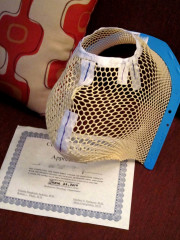 I went in yesterday afternoon, as usual, it was mentioned that it was my last treatment day, I got a certificate, they gave me my mask back and I went through discharge procedures. All in all, a pretty pleasant ending to what could have been a lot more harrowing. I’ve remained asymptomatic throughout this whole thing with little more than fatigue to even show that I was going through anything. So I was pretty much all smiles, and saying how much I’d miss them, but not really miss seeing them. Since I was there for such a short time every day, we never really got past the bare minimum of small talk, but even inconvenient things become routine over time. And I’ll be back to see them in about 4 weeks, so it’s never really goodbye anyway. 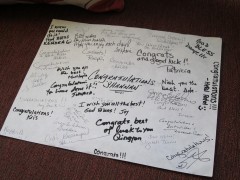 So, with mask in hand and a few celebratory tweets and photo, I waited on the bus and headed back to the metro. I noticed I had two missed calls** from a Washington Hospital Center number and I immediately started checking my pockets, thinking I might have left my keys or dropped something in the radiation oncology department. As I’m about to call back, they called a third time to let me know that they made a mistake and my doctor had actually ordered two more days of treatment for me. So could I please bring my mask back with me and Thursday would actually be my last day of treatment. 🙄

On the one hand, it’s my health and I’ll do what I have to to be healthy and well. On the other hand, when I saw the doctor on Thursday last, he said “We could give you two more days of treatments, but I don’t think we’ll do that.” That conversation is what confirmed the planned happy hour! And while they’re surrounded by computers and records and notes, they didn’t realize that the doctor had made an updated treatment recommendation until after they discharged me?!

My elation at being finished was replaced with an intense annoyance. Which, as it turns out, is a good thing because either emotion is pretty good at fighting the fatigue to which my body would love to succumb. Brain is totally overriding body these past few days, because I could really use a nice long nap. Something along the lines of a week or so!

Anyway, I hope to see some of you tonight, unfortunately I won’t have my mask there for everyone to sign, which might be for the best as it is a bit creepy. Sort of like an old school VR version of my head. Urb Headroom, anyone?

* Or perhaps it’s “sike.” There seems to be some minor internet debate on that.