Yes… again. The apartment hunt is on, actually has been on for a few months now with not too much to show for it. I’m on the lookout for a 2 bedroom in the Mount Pleasant/Columbia Heights area and pickings aren’t exactly slim just… not to my taste, I guess? There are times when beggars can’t be choosers, but this isn’t one of those times, at least not yet. 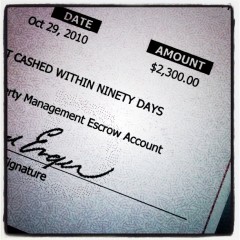 I posted an instagram pic last night with the caption, “I’ve never been so annoyed to get a check for $2,300” and it was the truth. I had found the dream apartment. It was a block away from metro, at a Circulator stop, back in the neighborhood I’ve been missing since nearly the time I moved away and in the same building as one of my best friends–practically next door, actually.* We looked at it, deemed it perfect, got an application and were off… until we looked at the application which was more like that one gets when applying for a loan to buy a house, not rent an apartment. Long & Foster is managing the property and they wanted what one considers “standard” stuff, current/previous employment and residence, permission to run a credit check–which also cost $40 per applicant–and then it got odd. They wanted to know bank account numbers and balances, they wanted recent paystubs, whether we had online bad credit loans and our previous year’s W-2 forms and the oddest thing which I’ve never been asked–on a form, anyway–was whether we had a waterbed.

Still, when you want the place, you jump through the hoops, regardless of the fact that it was a Saturday and they could have sent ahead these requirements when I booked a visit at the open house.** The kicker was that they wanted an Earnest Money Deposit (EMD) of the first month’s rent to act as security deposit whether we were approved or not. In my time in the DMV, I’ve never been asked for that. A partial deposit to hold a place in a larger managed building, sure, but a check for rent up front? Still… hoops, but it presented a problem since neither of us uses (or even has) physical checks. And the open house was held well after banks closed on Saturday so there was no chance of even getting a temporary check. We filled out all the fields, checked the boxes and all that and submitted the application with a note saying that we use electronic banking and to let us know if the EMD was absolutely required before proceeding, more information here. I figured that they would say that it wasn’t, especially considering we’d given them bank balances, so it wasn’t as if we weren’t good for it.

The next day at work, I get a frantic call from the agent saying how they:

I didn’t push it, but reiterated that my only option was to get a money order and that I didn’t think either of us were comfortable with that. So she gave me an account on their online payment system and I was able to use my bank info to give them that pre-payment that they may not even process and/or use that they desperately needed so much. And we waited…

As you can probably tell, we didn’t get the apartment, and a $2,300 check was in the mail back to me a day or so after getting the rejection e-mail. They said they chose other applicants, so we’ll never even know what, if anything, put us out of the running.

Chin up, though. I don’t have to be out of my current place until the end of the year, so I have a bit of time. And considering most apartment listings in DC are set to occupy right now, I’m not too worried. But if you know of someone looking to fill an apartment in that–or some other utterly fabulous area in DC–let me know! The hunt continues!

* Which some may argue is a con, not a pro, but time would bear that out. We love each other, but know when to give each other our space, too.

** I hate open houses. Having to jockey for position with a bunch of other yahoos viewing the apartment is not my cup of tea. At the least we arrived on time–she was late–and were in and out of there well before anyone else showed up.