HIV/AIDS: “Our rates are higher than West Africa” 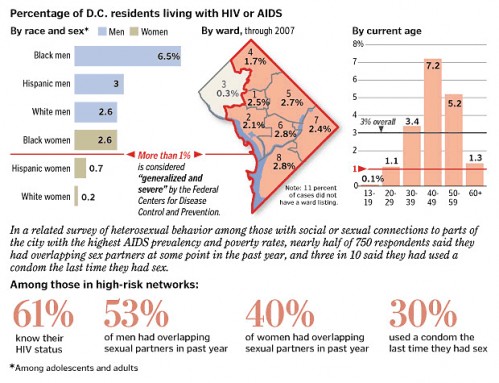 I don’t really have much to say about this article*, but if you’re a D.C. resident or just know someone in the District, inform yourself and spread the word.

At least 3 percent of District residents have HIV or AIDS, a total that far surpasses the 1 percent threshold that constitutes a “generalized and severe” epidemic, according to a report scheduled to be released by health officials tomorrow.

Actually, I do have one thing to say about the Washington Post. While I’m glad this was the lead story in Sunday’s paper, I really wish they–and all news sites, really–would stop allowing non-moderated comments on their online articles. I don’t need to see this kind of ignorance and hate being spewed forth on the internet. Especially since their own discussion guidelines supposedly forbid it.