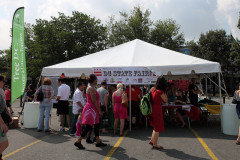 DC State Fair Tent, by flickr user Mr. T in DC. When I was growing up in Georgia, we’d visit1 my grandmother in the Summer and one thing we’d always look forward to in the later Summer months was the local county fair. Mostly because it was impossible to ignore, even though it was a fair distance away, we could just see some of the rides from grandma’s house and the signs were always there when we drove around to run errands. I mostly remember the rides and attractions because that’s what my brother or cousins wanted to see, but one year we did walk past the agricultural area and saw that they sponsored the kinds of contests some more closely associate with a county fair–livestock, produce, home baking and canning were all represented.

Years later, living in DC, I’d still see ads for local county fairs or see local carnivals & rides set up in parking lots as I drove by on the interstate, but those were always in Maryland or Virginia, never DC. In fact, the words “State Fair” and “DC” were very unlikely to ever be associated in my mind… until now. Because later this month, the 2011 DC State Fair will be held on Saturday, August 27, from 10 AM to 6 PM at Columbia Heights Day. It aims to celebrate the home-grown talents of the District–gardeners, cooks, bakers, photographers, and artists.

DC State Fair found themselves in the crosshairs of 5.1 this week to answer some questions about the origins of the fair and what locals can expect to see this year.

1. How old is the DC State Fair? What was the initial inspiration for putting it all together?

DC State Fair is barely over a year old. Officially incorporated as a nonprofit in October 2010, the organization started as three food and garden bloggers’ dream, and became a success through the tireless supporting efforts of other bloggers, friends, volunteers, sponsors–and of course contestants!

The initial inspiration for DC State Fair was a post on Amelia’s blog, Gradually Greener, about entering her DC-grown tomatoes into a contest in Virginia. A few months of getting psyched about the idea of a community-focused agriculture and foodie competition while at DC Food Blogger Happy Hours led to the first DC State Fair meeting in July 2010–just weeks before the inaugural event.

2. When I mentioned the DC State Fair to someone, they said "It’s not really a State Fair without a ferris wheel!" While your focus is clearly on local crafters and gardeners, how do you respond to those that might be expecting something along the lines of a more traditional State Fair?

We often get the "It’s not a state fair because DC isn’t a state!" response! But the name is intended to convey the idea of what we do–celebrate a region’s agricultural, culinary, crafty, and other talents–in a way that is culturally analagous to events everyone can relate to. We don’t have a ferris wheel, or even funnel cake–yet. In the future, as we grow, we might!

For now, to get the most state-fair-y feel, we decided to buy vendor space at the neighborhood community festival Columbia Heights Day, which organizes a dog show, has a petting zoo, a cupcake eating contest, and showcases a lot of organizations and businesses in the neighborhood and within DC.

3. Columbia Heights Day is hosting the DC State Fair again this year. Do you think that has limited the interest in contest submissions and volunteers due to its location? And do you look forward to being self-hosted some year to have a more District-wide appeal?

DC State Fair definitely looks to grow large enough as an organization and community institution to host the Fair as a stand-alone event. The location is so convenient to the Columbia Heights metro stop, it’s hard to imagine it would inhibit entries. But we do hope to initiate programming and other activities in other quadrants of the city to help engage and involve more of DC’s community.

4. You’re partnering with Meridian Pint–during DC Beer Week–for your Homebrew Contest. How did that come about and have the contest categories changed much between this and last year?

Our Homebrew Contest Master, Jake Grover, teamed up with Meridian Pint to pull off this two-part event. Meridian Pint has experience hosting homebrew competitions–they have a regular series, so partnering with them was wonderful! They are also close to the DC State Fair action on August 27, so people can pop in for a pint before and after their contest entries are judged.

5. The DC State Fair (at Columbia Heights Day) is just over a week away (August 27), do you still need volunteers and what kind of work should volunteers expect to be doing up to and on the day?

Of course we would welcome more volunteers–we are a completely volunteer-run organization, and we do heart the people who donate their time and energy to help us out! We have several time slots (9-11, 11-1, 1-3, 3-4:30, 4:30-6) and need several volunteers for each. We need a few volunteers as Information, to engage the public who may not know about DC State Fair and help direct people to Registration or even to areas beyond the Fair, in the greater Columbia Heights Day festival. These people are perhaps the first ones who talk to festival-goers who may not know about the Fair–but hopefully will stick around to watch the judging and come back next year with entries of their own. Registration volunteers will coordinate entry drop-off with contestants, ensuring that all information is accounted for to qualify for special contests or ensure judges’ safety while tasting the prepared foods and baked goods. Prep volunteers will work the back, arranging entries and preparing them for judging–slicing pie, spooning jam, that sort of thing. Of course, there will be a lot of action and needs may be flexible–but if anyone’s interested in helping out in any capacity, check out www.dcstatefair.org/volunteer and let us know 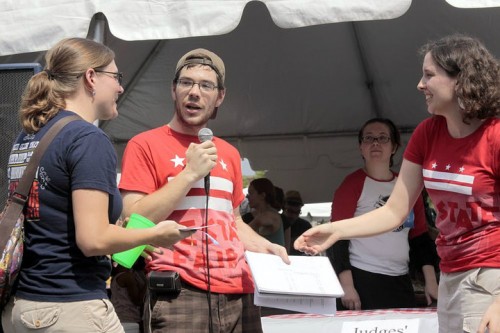 5.1 Have you had any ideas or resident submissions for new contest ideas? Will we ever get to see DC’s eaters showcase their stuff in a pie-eating competition someday?

When DC State Fair is a standalone event, perhaps we’ll have a pie-eating competition (or even pie throwing!)–in the meantime, Columbia Heights Day puts on a cupcake-eating contest that is great to watch!

We have had a lot of ideas for new contests, from our volunteers, ourselves, and the community. As we grow, we are modifying existing contests and developing new ones–although DC’s creative talents were out in full force last year, as seen in the amazing photographs, cupcakes, and all of our other entries, we hadn’t offered any crafting categories. We are this year, with Bike Accessory, DC Portrait, and Vegetable Sculpture, as well as a special prize that any of these crafts made with recycled content qualifies for. In the future, we will hopefully be just as expansive in our contest categories as the bigger State Fairs.

A big thanks to DC State Fair for their time and you can keep up with them at their website or subscribe to their newsletter. Columbia Heights Day is just 10 days away, I’ve never been and am really looking forward to it. I hope to see you there!2

1 And by “visit” I mean we were dumped there for most of the Summer. I still remember watching the trail of dust as my parents drove off, knowing that my sentence had just begun.†

† Not that it was so bad, it’s just tough being away from your room, gadgets, games, books, etc. for weeks!

‡ I am your favorite, right? Don’t worry, none of those other bloggers have to know. This is just between us… and the internet.