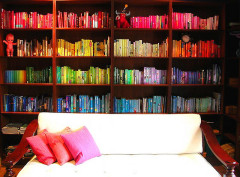 Hard as it may be to believe, I still read books. Admittedly, most of them are comic books, but I’ve been trying once again take advantage of the commute or a little lunch break at the office to read. It doesn’t have quite the same feeling on my iPad as with the physical media, but it is pretty convenient to be able to carry around 4 or 5 books1 in something about the same size as my high school spiral notebook.2

The only drawback is that peering over the edge of my iPad at cute guys on the metro doesn’t have the same allure. For all they know, I could just be playing Angry Birds! While some might enjoy the ability to hide their bodice-rippers, I have no shame. Whether it’s a brightly colored comic or modest black on white e-book, I could care less if the person next to me peers over my shoulder.3

Still, it’s hard to deny the ease of it. I love my e-books and just like many with iTunes, it’s far too easy to buy them. One click and it’s done. You’ve spent anywhere from $0.00 to maybe $15–in rare cases–and you’re off. Kindle, Nook, iBooks, etc. doesn’t matter really. I used to spend my mornings browsing music to add to my device, now I browse the free & cheap books! 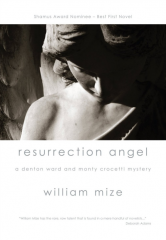 But hey, just because something costs 99¢

by William Mize. Attentive readers may notice that I’ve talked about this book once or twice before and with good reason. While physical bookstores are becoming a thing of the past, I wouldn’t mind seeing a section called sci-fi noir. You could call it a mystery, as there’s definitely one in the book, but I think the characters will draw you into the plot more than anything else. I say that as someone that doesn’t particularly like reading mysteries.4 Mostly though, I love the way he writes.

"Sometimes you do," he said. "Sometimes you don’t." He opened his desk drawer and pulled out a bottle of pills, a shaman’s rattle, the prescription and the dosage a magic incantation to be whispered by a believer. He opened the bottle, shook out two and swallowed them dry. He closed the bottle and put it down on his desk. His hand passed under the light and he paused, paused to look at his thin, tapered fingers, at the lines that crossed his palm. He found his life line, then followed it down to his wrist, down to the jagged white scars that were kept hidden beneath his starched white cuffs.

There’s a free excerpt at his website, and if you’re hooked, you can follow the pair into the follow-up book Everlasting Life

–for the Twilight/True Blood obsessed out there, it has vampires! 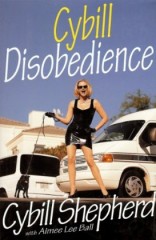 And just to show that cheap things can be a little bit trashy, I picked up Cybill Shepherd’s “tell-all” Cybill Disobedience

I always loved her, moreso in Cybill than Moonlighting because she was unafraid to be herself and make a sitcom that, while occasionally venturing into the absurd, actually portrayed something close to her real life. For all I talk trash about efforts to create an American version of Absolutely Fabulous, Cybill is as close as it comes without ever even trying to do so.

And as much as we like to say “forty is the new _____” these days, it was a very different story for actresses in the late 90s.

With few exceptions, American television has become the Bermuda Triangle for females over forty. There was a wide variety of middle-aged women on the air in 1998, and they were all gone by 1999. Not only Cybill, but Murphy Brown, Ellen, Roseanne, Grace Under Fire, and Dr. Quinn, Medicine Woman all disappeared the same year. It’s true that these shows had been around for a while and may have run their course, so this chorus of swan songs takes on a deeper significance when we see the replacements: Felicity, Darma & Greg, Moesha, Ally McBeal, Sabrina the Teenage Witch, Buffy the Vampire Slayer, and those very skinny Friends. No one over thirty need apply.

I don’t really truck with the Goodreads crowd. I am curious about what my friends are reading, but I’d rather they tell me over a meal or via e-mail than a blast to all their “friends” to say “click here!”5 I don’t want to fully embrace this compression of expression. 140-characters sometimes aren’t enough and Blogger, WordPress and Tumblr are still free. Of course my most hated thing in school were book reports, so I’m hardly one to judge, but if after all these years I can go on at length about a–non-comic–book, anyone can.

So… what are you reading these days?

1 Yes, I could carry around hundreds or even thousands of books, but why? For all those commercials boast, who has time to read hundreds of books, even while on vacation?

2 Or my Trapper Keeper! Mmm, nostalgia.

3 I will say that I get stopped a lot more when I’m reading comics than books. Usually by men whose accompanying wives/girlfriends then tell me how much clutter their guy’s comics are taking up in their homes.

4 But we love a good “Poirot” on PBS in The Swanktuary.

5 I feel the same about nearly any “what I’m doing/share my life” services that just link you to a static page without any personal content.