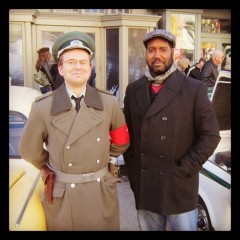 I feel like I should give this photo an appropriately vintage’d sepia filter and edit a TARDIS into the background.

We headed down to the Spy Museum on a surprisingly brisk–almost chilly–morning to see the finest in German Cold-War Era Automotive Engineering, the Trabant. Took lots of pictures, had some good conversations with very enthusiastic Trabant owners and Spy Museum employees. It was a little cold to stick around and try the raffle to win a ride in a Trabant, but I learned quite a bit. Most interesting was that the wait time to purchase one was as long as 15 years. One of the Trabant owners told us that families would order one when their children were born and when that child came of driving age, whatever model, color and style happened to be en vogue and rolling off the lot was what they got. A stark contrast to the assembly lines in the US.

You’ll still mostly see Trabants in spy movies–the Spy Museum has two in their exhibits–or as a symbol of the fall of Communism, but it was… cute to see so many at once. Unless there’s something really special taking place during the annual event, once is probably enough, but for a “free in DC” thing, it was fun.