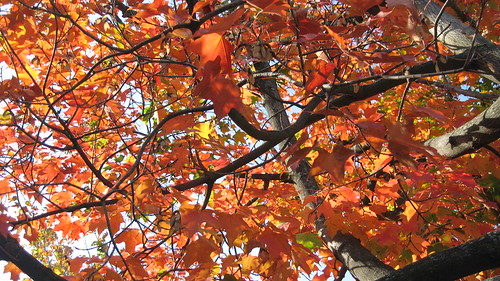 Ok I know I’m a weather wuss, but it seems like cold Fall temps have moved in pretty much overnight! There was a frost warning last night ‘n all! Maybe we deserve it because last winter was extremely mild, but damn, I’ve gone from medium jacket to heavier coat in one weekend!

Saturday was really nice, James metroed in and we walked all over creation, it felt like. Actually we mostly walked the embassy area, starting out heading up Connecticut, swinging past Hello Cupcake* and doing a “Wagon Wheel” as he called it. I’m pretty sure he just made that up, but we did sort of circle around the area and head in and out of the feeder streets. It was kind of fun, actually, I walked in directions I normally wouldn’t have gone and while I knew where I was, I hadn’t actually been down many of these streets.

After about 3 hours of walking, food sounded like a good idea, so we totally stuffed ourselves at Buca di Beppo in Dupont, then waddled home. Because I took advantage of an approaching bus, I totally missed out on the Scientology protesters. I hear they put on a good show and this time they had cards for free bacon! 🙁

* So ok, I’ve finally been to a cupcake place. Call me crazy but I’m not spending $3 for a cupcake. I know I’m gay but, in my opinion, this is a trend gone too far.