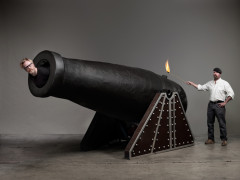 It’s about as much of a secret that I used to love the show Mythbusters as it is that I think it’s now gotten stale and played out. At this point, it’s a wonder they haven’t done a “jump the shark” myth. So hearing about this little tidbit on this morning’s news was rather amusing. ‘Mythbusters’ cannonball hits Dublin home, minivan:

One of the zany experiments staged by the “Mythbusters” television show nearly turned into a suburban tragedy Tuesday afternoon in Dublin when the crew fired a homemade cannon toward huge containers of water at the Alameda County Sheriff’s Department bomb disposal range.

The cantaloupe-sized cannonball missed the water, tore through a cinder-block wall, skipped off a hillside and flew some 700 yards east, right into the Tassajara Creek neighborhood, where children were returning home from school at 4:15 p.m., authorities said. 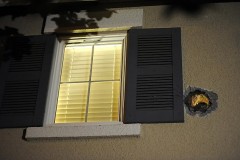 I remember how momentarily freaked out I was by the recent earthquake until realizing what it was. I can’t imagine coming home to a large hole through my house or worse a cannonball having crashed through a car outside.

NowPublic has a picture of a re-tweeted, now deleted1 update from Grant Imahara saying, “Today we’re working with heavy artillery.” Both Imahara’s tweet and the official Mythbuster’s account re-tweet have been deleted. They also provide some important lessons from this incident.

So far there’s a complete silence about the incident across all of the show and cast twitter accounts: Official MythBusters, Adam, Jamie, Grant, Kari and Tory have probably all been ordered to scrub any tweets or re-tweets2 regarding the shooting of that segment, unsurprisingly.

The news is already all over twitter, NPR, local news, etc. and it looks like Beyond Productions has made a statement, though it can only be found in some of the reported stories. Local twitter user Clay Goetz has a series of tweets and pictures about it:

There’s a chopper above a house near me… BECAUSE IT GOT HIT BY A CANNONBALL WHILE THEY WERE FILMING MYTHBUSTERS. What?!? #fb

And other tweets about the incident are equally curious, supportive and wondering if this really does mark a decline for the show. I don’t want to see this take the show down, but I wish they’d focus less on blowing things up and more on busting myths.3

Update: It appears that the ban on the cast comments and social media accounts is over as all of them posted to twitter at approximately the same time yesterday.

It’s true, a cannonball got away from a Mythbusters experiment in Dublin, CA. Nobody hurt thank goodness. Jamie and I toured the damage.

Loose cannon: glad no one was hurt. Won’t happen again.

Deepest apologies to the families in Dublin whose property was damaged as a result of this accident. I’m really glad no one was hurt.

Taking yesterday’s accident very seriously. So happy everyone is all right. So sorry to all who have been affected.

My deepest apologies to Dublin. Fortunately no one was injured from our accident. We’re doing everything we can to make things better.

In looking at the messages, it seems like there may have been some guidelines imposed:

Again, I do enjoy the show, but I think they’d be better off spending less time trying to figure out how to get an explosion into every program. And at the least, use a bomb range for its intended purpose: testing and/or replicating explosive devices, practicing disarming procedures, and general safety, not firing projectiles. 🙄

2 Not that all of their accounts are particularly “active”.

3 And I don’t mean “movie myths”. They’re supposed to be fantastical and a wee bit unbelievable, they’re in MOVIES.

† When could there ever have been a more appropriate time to use that cannon image of Adam and Jamie?