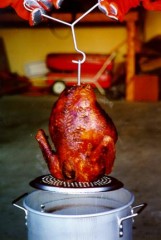 Sad as it makes this Southern boy, I have always maintained a “no frying” rule in my apartments for many reasons, the resulting weight gain and lingering smell chief amongst them. Still, on Thanksgiving Eve, I can’t help but long for Tom Turkey to leave a deep fried turkey in my Thanksgiving Cornucopia that’s been hung with care from my oven. And every year, I must not have been good enough, for it never arrives even though the mulled cider and candy corn I leave out for him are always gone.1

I first had deep fried turkey before it was really popular at my parents’ Homecoming tailgate and it was indeed delicious, but watching the amount of prep and safety required definitely turned me off. As a fan of explosion and high-speed camera shows on Discovery Channel, I’ve seen plenty of “the inherent dangers of frying turkey” footage.2 Unfortunately it doesn’t turn off enough people and those don’t take enough care in frying their turkeys each year. So State Farm insurance went the pop culture route and teamed up with William Shatner for a PSA about turkey frying safety:

William Shatner loves deep-fried turkey, but over many Thanksgivings and Christmases he’s made mistakes, burned himself, and nearly burned down his house. In this dramatic retelling, Bill shows us how dangerous turkey fryers can be.

They’re inviting everyone to share their deep-fried turkey tales on YouTube and on Twitter with the #ShatnerFryersClub hashtag. I suspect the most dangerous thing I’ll attempt this holiday is egg nog.3 But the only thing that’s in danger of exploding is my language should I drink too much of it.

I hope everyone has a fun and safe holiday and for those DC-area fed workers, let’s all cross our fingers for early release today!

1 I may be a little sketchy on the core concept of the holiday.