Just heard this snippet on Gaydar Radio as I was on my way out the door to work this morning. Alastair Campbell recently appeared on the BBC show Top Gear and wrote about an exchange between himself and host Jeremy Clarkson that was cut from the air on his blog. 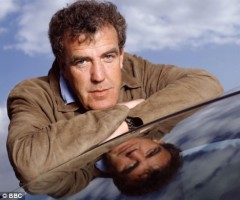 So what else–well there was the gay rights bit. I cannot remember how the subject of homosexuality came up, but I said at one point that he wasn’t very sound on gay rights … Oh yes I am, he said, adding, to more laughter from the largely adoring (of him) crowd ‘I demand the right not to be bummed.’*

I had the immediate thought that this was unlikely to be broadcast at 8pm on a Sunday, with Songs of Praise still ringing in some ears, but nonetheless chipped in that I suspected he was worried that he might like it. He seemed to enjoy that, and recalled his public school education, though without any detail.

Since this exchange was cut from the air, there’s only Campbell’s word–who reportedly didn’t fare well with the audience–and the lack of BBC’s denial to go on. But even with the few episodes I’ve watched, I wouldn’t be surprised. Gay rights groups have criticized Clarkson for the remarks but the best response comes from Ben Summerskill of Stonewall:

Surely the reason Jeremy Clarkson doesn’t want to get bummed is that he needs somewhere to speak out of.

The BBC said that their 25-minute interview had to be cut down to 9 minutes, not uncommon for television shows. It’ll be interesting to see the fallout, if any, for this one. Considering the show and it’s usually singular topic, I doubt much will happen. After all, if Stephen Fry can appear on the show and talk about Grindr without incident…

It’s clear that anything said and done is all just for ratings and audience applause. Still, perhaps people would enjoy Peter Serafinowicz’s skewering of him on his holiday special. Certainly gives new meaning to the name of the show, that’s for sure!**

* If you don’t know what the slang “bumming” or “being bummed” means, check Urban Dictionary.

** See? I waited until the very end of the article to make a top joke! I have restraint.