Made it to the metro station, a little bit later than usual, but it’s Monday, right? As our Green line train is a few minutes away, I hear the familiar WMATA announcement informing customers that there’s a delay on the Orange line. While thankful I don’t take that line to work, it’s still a bit hard to swallow since WMATA’s only been open about an hour and there’s already a mechanical issue. Most annoying is that they end the announcement with “we apologize for the inconvenience”. It’s not an inconvenience, it’s a service interruption which may well result in who knows how many customers arriving to work late. Many of which, I’m sure, have already learned to arrive at the metro station earlier than usual just in case of delays–which are getting to be the norm. 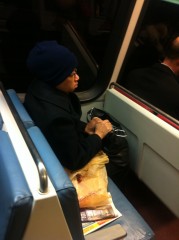 Still, Green line is good to go–knock wood–and our train arrives without much fuss. Because we were later than usual, there were no double seats. My guy and I like to sit together and chat–or not, if we haven’t had enough coffee yet–but in situations like this, we try to find a pair of aisle seats next to each other and make do. Unfortunately, I chose poorly and ended up next to a seat hog so annoying that most of the following was written on my phone while seated–for as long as I did–next to her…2

This woman is perhaps 3/4 my body width, yet she has a large purse to her left and has spread out her two free daily newspapers–neither of which she’s reading–and a plastic bag full of who knows what on her right. I say “Excuse me,” hoping to sit down and before she moves a thing, she looks around then rolls her eyes as if to say “Weren’t there ANY other seats you could use?”

How I do so love my fellow metro commuters.

As I type this, she’s barely given me any seat room having not removed her purse which is taking up nearly 1/2 a seat on its own. If she wasn’t so slim, I’d be pushed out into the aisle. She’s adamantly standing her ground, too, her elbow is jabbing me in the side because she insists on fiddling with her phone. I’ve turned to sit sidesaddle so I can keep typing.

Forget it, I’m standing up for the rest of our ride.

…or not as a fellow commuter we see nearly every morning has slightly renewed my faith. She got up3 and stood by her now empty 2-seater and “held” them as best she could so we could sit together.

Thank you, near-stranger. You’ve made my Monday just a little less pissy.

By the time I’d moved back around to snap a photo, she placed her purse on her lap. Had she done that when I sat down next to her, I probably would have been fine. But the movement of the purse had nothing to do with being courteous. She was just positioning herself to exit the train. 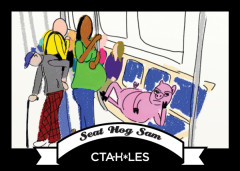 I see and deal with seat hogs all the time, and I’m desperate not to be one, even when traveling with large bags. I’m broad-shouldered enough that with winter layers, just trying to read books on my iPad comes close to shoving out the average-sized passenger so I try to be as mindful of it as I can.

Still though, marking your territory like that on a Monday morning is just plain rude. Worse so is the refusal to move your stuff that is clearly only there to dissuade others from sitting next to you. If you’re that much of a misanthrope that you can’t stand anyone in your space on your commute… just drive and save the rest of us the annoyance. Because it only starts with being a seat hog and before you know it you’re developing a bunch of fake tics and mannerisms and then you move to being outright aggressive to keep people from sitting next to you. Which admittedly would be great blog fodder for me, no lie, but I think if I see her again, I’m going to steer clear and rely on the kindness of others to keep my morning commute pleasant.

1 I would later discover that I’d forgotten something else, but by then I was one metro stop away from work.

2 With slight edits for grammar and punctuation, so please forgive the mixed tenses.