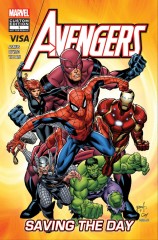 Nothing quite like free comic books, right? Not just on Free Comic Book Day–coming up this Saturday, in fact–but the comics you could get by sending in UPC labels, or packaged in breakfast cereal, or handed out at school or your local Radio Shack!1

Comic book characters have taught kids (and adults) many lessons over the years, but in a world where it takes being either a mega-millionaire2, a government sponsored hero or in the X-Men’s case, having the occasional alien monarchy benefactor just to maintain repairs, I don’t think I’d be asking these guys for advice about money. But that’s just what a new comic book from Visa and Marvel aim to do with “Avengers: Saving the Day”…

Join Spider-Man and the Avengers in this exciting educational comic about saving money and saving the day. The heroes team up to defeat the villain Mole Man and his evil army, all the while learning important financial skills. The action-packed comic features a budgeting worksheet, finance terms and more.

Budgeting worksheet, finance terms and more… Sounds like a fun time, right kids? The comic is being distributed free and is also available to read online. Given the timing of The Avengers movie release, it’s a smart tie-in, however I’m not sure how financial advice will blend with the marketing saturation of the movie. Teaching kids to better manage their money isn’t going to get merchandise flying off the shelves! But since Disney owns Marvel, there are still subtle messages afoot. 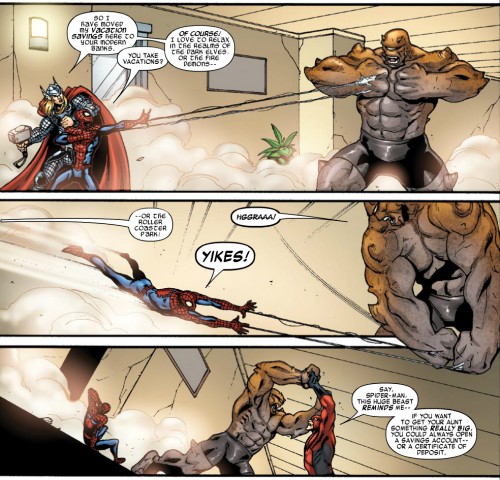 When I was in school, we didn’t have cool comic books teaching us this stuff, we had Junior Achievement. The main thing I recall learning from JA workbooks was how to write checks, but if the X-Men were giving me pointers, I’d have probably retained a lot more knowledge… though I still doubt I would have thought budgeting was cool.

Having just recently watched both Thor and Captain America in anticipation of The Avengers, I’m kinda lesser-known hero pumped so I guess I can’t blame Visa for jumping on the bandwagon wherever possible. I still say movie ticket prices and merchandise marketing blitzes don’t really jive with the idea of fiscal responsibility, however snagging a free comic book and then selling it to collectors on eBay in a few years/decades does, so I suppose it all balances out.

2 Or perhaps in Tony Stark’s case, a tremendous-trillionaire.