This is pw(m)c1 from the Marvel’s latest Daredevil Annual, a story featuring the title character with appearances by ClanDestine.

I don’t normally read Daredevil. I think the character is cool, but the mostly “street-level hero” background doesn’t always appeal to me. So even though this issue featured ClanDestine–a longtime favorite of mine–it didn’t come across my radar until a tweet from a friend pointed out that while Marvel may have covered many of their diversity-in-comics issues, they still have difficulty with some nationalities:

It’s 2012 and the ghost of the minstrel shows still haunts us. You can do better, Marvel Comics. twitter.com/kevharb/status…

I’ve clipped out bits from the three pages where a Haitian psychic tries to aid both the police and Daredevil. The minor character’s introduction is less than auspicious, “Ignore ’em. He’s Haitian… they blame everything on voodoo.” 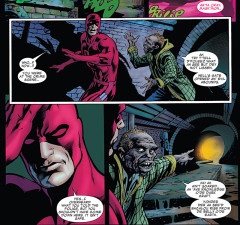 @kevharb is what most tend to assume is the standard demographic, the white male comic book reader–no offense–and it stood out to him. If you look at the collection of characters Marvel has given a Haitian background, it doesn’t look very… enlightened. Still, the panels above aren’t something I would expect to see in a 2012 comic. I expect better from both Marvel and Alan Davis, and yet here we are.