WARNING: At the end of this post may very well be the cutest picture I have of myself this year. You have been warned. 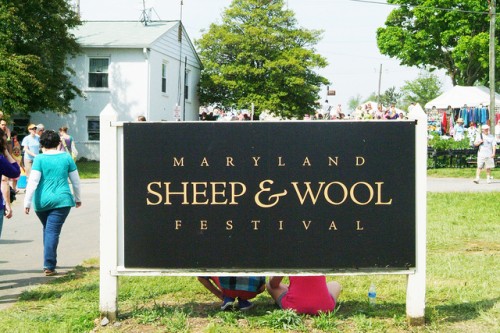 I have long been awaiting some (relatively) consistent nice weather days in DC since Spring officially rolled around. Generally, we’ll get spots of sun during the week with crappy weekends, or bright and sunny weekends that are also cold as balls. When friends mentioned the Maryland Sheep & Wool Festival a few weeks back, I thought “Yeah… you have fun with that.” But since the weather had shown signs of improvement on the weekend and–more importantly–it was free, I didn’t think walking around Howard County Fairgrounds on a nice sunny day would be such a bad thing, plus I’d get to see sheep and alpacas, filling my cute animal quota someplace other than the zoo for a change.

As you would expect from such a festival, there were plenty of yarn and fleece merchants, and they had some really gorgeous items. Naturally, lots of scarves and wraps, but also felted purses and other projects that wouldn’t readily come to mind, also mentioned were a lot of patterns from Ravelry using a merchant’s wool. Sort of a preview of what a particular color or pattern of yarn will actually end up looking like once complete.

A lot of it was encouraging me to get back to knitting. I did learn once, but after staring at my needles for a good long time last night, I’ve obviously forgotten how. But had I retained any of my skills, there was also plenty of equipment to buy. It’s probably a good thing I didn’t consider myself a knitter or I might have come home with ALL THE THINGS. 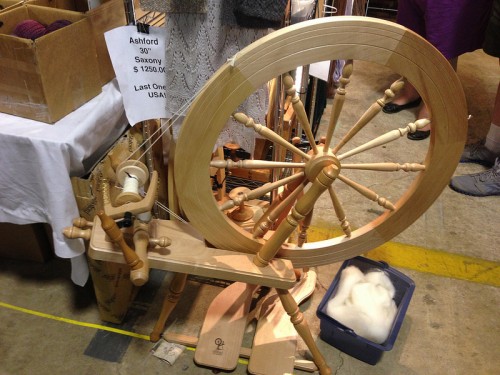 Thankfully, we’d had a big breakfast because fairgrounds always means fair food! We sampled a bit of lamb here and there and while it was good, I think I’d have rather visited a proper butcher to have some meat sent home. Not in a food snob way, but when preparing meats for mass quantities, the butchers don’t try anything special with sausage or meats. What we had was good, but some of it could have used more seasoning. Oh, and you can’t attend a fair without grabbing a bag of kettle corn.

Of course, there were also plenty of sheep! And alpacas too. 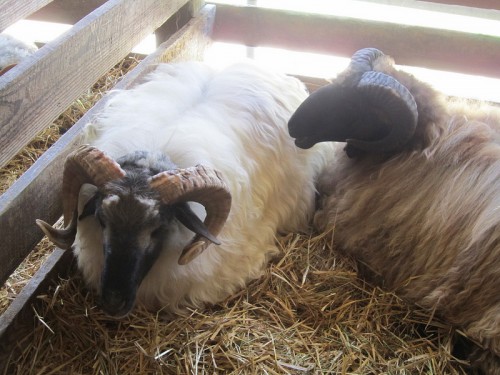 It’s one thing to see livestock, but when you’re invited to get up close to touch the coats that will be sheared off to make fleece and wool, it’s hard not to turn into Agnes from “Despicable Me”: IT’S SO FLUFFY! And while many of the livestock aren’t necessarily what I would call “friendly” they’re at least docile enough to sniff at you and then wander away. However, they are clearly not fans of being confined for shearing.

It was a really fun day for a Springtime festival and I think I overdosed on sunshine as I was in no shape to attend a Derby Party scheduled for that evening, but I slept great when I got home, and only had a tiny bit of skin peeling the following morning–sunscreen, y’all, use it.

The only really strange thing about the day was the number of times it was assumed by other festival-goers that I had absolutely no interest in the festival, crafts, yarn, knitting, etc. While watching a basket felting demonstration, a random woman touched my hand and said, “Quite the manly pursuit, huh?” And later, someone assumed that I was “the man” of my friend and was just there to pay for whatever she picked out. Not that I saw very many male knitters at the festival, but by now even I know it’s not just a woman’s craft.

Still, I promised you a cute picture and I shall not disappoint… 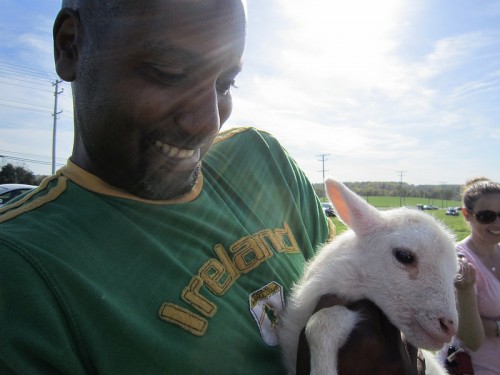 When we were leaving the festival and walking through the field-cum-parking lot to head home, there was a woman with two young sheep just grazing away while being oohed and aahed over by some other festival-goers. She was very friendly–and very talkative–as were the sheep who mostly paid us no mind at all… until she said, “Oh, they love being held.” 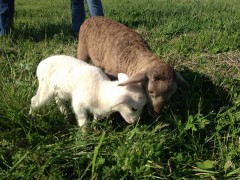 I was still a bit wary because the thought of even a small sheep starting to kick and baa in my arms was not exactly pleasant, but one of the other women passed the midget to me and cuteness ensued.

Totally random and totally cute, it made a perfect ending to a warm, but breezy day cavorting with sheep. And even if you have no interest in sheep, wool, knitting, etc. it’s still a great day trip, barely an hour outside the metro DC area. Now that we seem to have finally shaken off the winter doldrums, I look forward to checking out more of the local Spring festivals. Anyone who’s been in DC long enough knows that you have to enjoy them while you can, before the humidity of Summer really sets in!