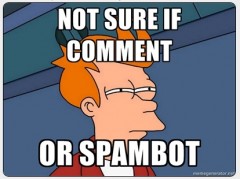 It may be taking a while for my coffee to kick in, but while clearing out the spam comments this morning, the following two are definitely winners, mostly because I have no idea what they’re trying to say… and I’m fairly sure the spambot program they used has no idea either.

Undeniably imagine that that you said. Your favourite justification appeared to be at the web the simplest thing to take note of. I say to you, I definitely get irked even as other people consider concerns that they just do not know about. You controlled to hit the nail upon the highest and defined out the whole thing without having side effect, other people can take a signal. Will likely be back to get more. Thanks

Needed to post you that very small remark to finally say thanks a lot as before considering the striking strategies you’ve provided on this page. This is quite extremely generous with people like you to grant freely just what a number of people could possibly have marketed as an ebook to help with making some cash for their own end, especially seeing that you might well have done it if you desired. These good ideas as well acted to be a good way to understand that other people have a similar fervor the same as my personal own to know the truth a good deal more on the subject of this problem. I’m sure there are a lot more enjoyable instances up front for many who read your blog.

I wish I knew enough actors to record dramatic readings of some of the spambot comments I get. I’m used to the weird random complimentary–while still being mostly indecipherable–comments from spambots, but they’re starting to make less and less sense while hoping I have no spam filters whatsoever. Not that my posts are going to cause vigorous debate, but when I run web searches on the phrases used in these comments, there are way too many other blogs out there that auto-accept all comments and are simply littered with spam.

Oh well, any chuckle I can get on a Monday morning is probably worth it.