On the whole, most acts shy of outright aggression are seen as weakness, and weakness is despised, punishment favored, cosmic justice scorned. We’re taught moment by moment, amidst the fray, to seize opportunities for advancement and reward and to crush impediments to them.

—So much for my Yelp revenge (Salon)

This was an interesting read as I’ve lately been wondering what people’s motivations are when they write up, criticize or otherwise call people out online. I had a poor experience at a restaurant out in Upperville, Virginia (feel free to search the archives) and wrote about it on my blog, as the closing of a larger “fun day trip” article. It got the attention of regular patrons and I had to contend with some nasty comments–only one of which I posted and responded to–and e-mails until I eventually got an apology from the owner and the offer of a free meal–from an e-mail address that bounced. It was clear that none of the comments I got read my post and even the one comment I responded to–of which I’m not particularly proud1–was more interested in calling me out than considering that maybe I just had a very isolated bad experience. 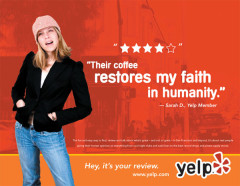 But beyond that, and applicable to so many other situations, the question always arises: what was the point? Or more specifically, what was your goal? When those people sent me nasty letters, were they trying to make me see the error of my ways and encourage me to give the restaurant they loved a second chance? No, they wanted to point the finger at me, let me know that I was in the wrong and maybe make themselves feel a bit better for sticking up for, as they saw it in this case, the little guy.

Similarly, I was at a restaurant with some friends last month seated near a table that had a service issue. Specifically, a patron had a food allergy and while she had not specified her allergy, she took issue with the face that their server wasn’t more diligent in checking. After some back and forth (including a threat to call the police), the party paid their bill and left, one saying “I’m going to Yelp this.” and another saying “I already did.”

I’m sure I could easily write an entire article about Yelp horror stories vs. horrific reviews vs. what actually took place, but the question comes to mind again, was the above review trying to warn potential patrons of an unlisted allergen in a food item, or was it punishing the restaurant for what a customer saw as not honoring the well-outdated “customer is always right” code?

Most interesting was the other night when instagram photos of utterly racist and just generally offensive Halloween costumes hit twitter. Once the direct link to the instagram pic was revealed, people immediately took to insults, not just of the account holder, but they also clicked through to anyone’s account who “liked” the photos and left nasty comments on their most recent photos as well.2 Many of them were directly threatening, which can be pretty scary on social media services where we’re inclined to share a lot more of our lives in a public manner than we realize. When I looked, the photo had over 100 comments, and none of them were trying to explain why it was not only a bad idea and horribly racist, but also why tagging the photo #joke was just plain stupid. More of the comments were along the lines of “fucking racist assholes” and the like.

Now, none of this is to say that all of us should approach our keyboards with the intent of making everything a “teachable moment” for someone else. Sometimes our voices are not required at all, but if you’re cracking your knuckles in preparation of a scathing review of a business or telling someone off in the comments section or starting a twitter fight, it doesn’t hurt to take a moment and ask yourself, “What do I want to come from this?”

And hey, if it’s solely to make yourself feel better, that’s valid too, maybe not always productive, but still valid.

1 My response came out of annoyance, glossed over the entire point of the article and was very much over the top, and when looking back at the situation, if I were to ask “Who was the asshole here?” there’s a fair chance the finger would have swung back around in my direction.

2 Disclosure: As I state in the linked photo, I only “liked” the photos to save them at full-size to Dropbox because I knew they’d be deleted or locked down come morning… and I was already in bed. I wasn’t getting up to go my computer and save them via other means.