Had an interesting experience in the cafeteria yesterday morning. I’d already brought in my breakfast, but accompanied a co-worker to get her morning nosh. Nothing out of the ordinary for my office routine. The only thing that usually changes is whether it will be crowded, or if I’m getting food myself, whether the grits are any good.1 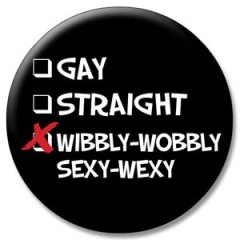 As we approached the register, we both headed to a cashier that has generally been pretty friendly in the morning, not over the top cheerful. And who had commented on my “Wibbly Wobbly” button from Northwest Press before, saying that a friend of hers had a similarly clever queer-positive t-shirt. And even though the cashiers don’t work on commission, I would still rather go to one that’s at least friendly versus one that’s surly.

So we’re approaching the registers and the two cashiers are having a conversation, the gist of which appeared to be that the less-friendly (not surly, just more no-nonsense) Cashier A was thinking of sending her man flowers, and my co-worker and I were a bit shocked to hear friendly Cashier B say, “If I gave my man flowers, he’d be all ‘What’s with this gay stuff? I ain’t gay.'” Cashier A seemed a bit taken aback–as were we–as Cashier B continued with, “I mean, I have a cousin who’s like that, but not my man.” The words “like that” punctuated with the oh, so familiar stereotypical limp-wrist hand motion. My co-worker checked out and we left the cafeteria without saying much to Cashier B, but I did notice that as she continued, Cashier A gave her a light smack upside the head, probably because there isn’t much you could say out loud at that point that would make things any better or worse.

What gets me… is that she could use the word “gay” to not describe her man, but couldn’t just say “my cousin is gay”. Like, she’d thrown it around so much as a negative already, would one last time have been so bad? Or did she really need the emphasis of an asshole move like the hand gesture? In any case, I think I’m done with Cashier B… not like we were developing a fast friendship or anything, but stuff like that reminds me of growing up in Georgia and living other areas in the South where people would whisper “black” or inject “they were white, you know” as an aside into conversation. Or worse waving a hand in front of their face, or pointing to the darker/lighter side of their skin to indicate race. Like… it’s 2014, evolve already.

But even casual homophobia is still homophobia. So, y’know… “Bye, Felicia.”﻿2

In happier news, it’s warming up, Winter finally seems to be sitting down and letting Spring come in, all that March/Lion/Lamb stuff. So if you got a nice day where you are, enjoy it!

1 But since they don’t use any salt to cook them, they’re never really that good.
2 I’m not saying that’s her name, but I’m also not saying it’s not her name.