I’m not sure when I came around on wings. When I was a kid, they were sold as “Drumettes” and my mom might make them if we were camping or at a group picnic, but in general I always thought they were too much work, too little food. And when I’d have them in later years, they were drowned in a sauce that made them soggy and a total mess to eat. Frankly, if it hadn’t been for Pan-Asian take out places that straight up fried the wings with no sauce, I might have given up on them forever. 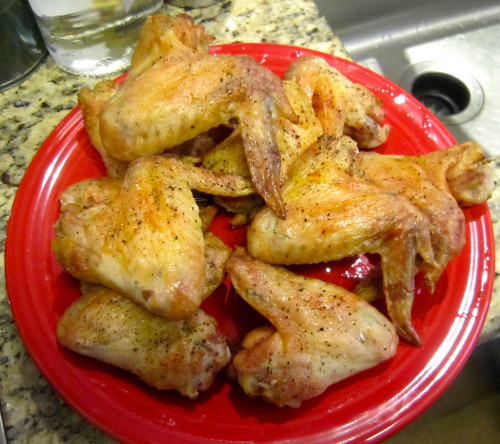 Unfortunately… the wings were fried. It became a great comfort food for me… and my belly… and my waistline. So I tried doing them myself at home, baking them didn’t have the mojo at all, smoking them was hit or miss and roasting them was good, but the main method I followed–Alton Brown’s–was a little more tedious than I liked. It still became a go-to recipe, however, until a little more browsing around online resulted in my new method.

To put it simply: brine, nuke (par-cook), roast. I use whole wings instead of separated ones as they’re cheaper–especially in a value pack–and I think they come out juicier as a finished product than “party wings”. I brine the wings for 6-8 hours, par-cook them in the microwave and then roast them to doneness and further to desired crispness.

And I should note: chances are if you’re already going to roast chicken wings, you’re not squeamish, but many of us who have ordered wings from take out places have found… feathers. If you buy a value pack of wings, you are pretty likely to find a few here and there, so give the wings a once-over before cooking, just to be sure. There’s nothing worse than tucking into comfort food and finding something that gives you pause, no matter how much your brain knows it’s a perfectly normal part of a bird.

Most methods for wings–save frying–are going to involve a bit of time and attention, but a lot of the prep for these can be done in advance up to and including the par-cooking, which would make it easy to pack them up for cooking at a destination. Additionally, they reheat very well, so could be completely cooked in advance and reheated on the spot.

There are some "your miles may vary" options in this recipe, primarily the strength of the brine and the length of roasting/finishing time. Additionally, I encourage you to find the best means of par-cooking that works for you. If putting raw chicken in your microwave isn’t your thing, you can par boil or even steam them, but the microwave method is the fastest and easiest I’ve found.

You may notice that I said nothing about sauce in the recipe. I’m apparently “weird” in that I like my wings unsauced. The brine does give them a lot of flavor and I think sauce messes up the nice chewy/crispy skin they get. However, I would suggest that you: brush the wings with sauce while roasting, serve the sauce on the side or if you really want to, just toss the wings with the sauce once cooked. Sauce or no sauce, be sure to have a wet-nap handy as this dish is not for the prim, proper or proud. Enjoy!