Update: Alison Bechdel has stated before that she got the idea for the strip from a friend Liz Wallace and more recently said that she would be happy now calling it The Bechdel-Wallace Test.

Someone pointed out that "oh my god, becky, look at her butt" passes the bechdel test and I haven't stopped laughing for a week

For anyone unaware of what it is…

The Bechdel test asks if a work of fiction features at least two women who talk to each other about something other than a man. The requirement that the two women must be named is sometimes added. 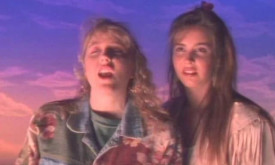 Talking to each other? Check.

Not talking about a man? Check.

One of them is explicitly named? Check.

Heck, they even open the video so can be considered prominent characters. So honestly, who among you can now say that Sir Mix-A-Lot does not truly love and respect women?

1 As an image, though, which is continuing to be a problem. Sure images are better for engagement, but screenshotting others’ content for no real reason–this tweet has very little chance of being deleted–instead of linking people to the content itself doesn’t make much sense except as a selfish move.