From Letters of Note comes a piece of viewer mail to Paramount Pictures in 1993 expressing their dissatisfaction with Star Trek: Deep Space Nine. 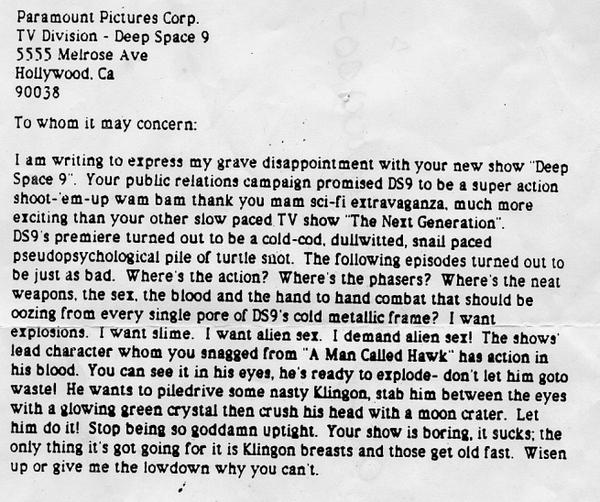 To whom it may concern:

I am writing to express my grave disappointment with your new show “Deep Space 9”. Your public relations campaign promised DS9 to be a super action shoot-’em-up wam bam thank you mam sci-fi extravaganza. much more exciting than your other slow paced TV show “The Next Generation”. DS9’s premiere turned out to be a cold-cod, dullwitted, snail paced pseudopsychological pile of turtle snot. The following episodes turned out to be just as bad. Where’s the action? Where’s the phasers? Where’s the neat weapons, the sex, the blood and the hand to hand combat that should be oozing from every single pore of DS9’s cold metallic frame? I want explosions. I want slime. I want alien sex. I demand alien sex! The shows lead character whom you snagged from “A Man Called Hawk” has action in his blood. You can see it in his eyes, he’s ready to explode- don’t let him goto waste! He wants to piledrive some nasty Klingon, stab him between the eyes with a glowing green crystal then crush his head with a moon crater. Let him do it! Stop being so goddamn uptight. Your show is boring, it sucks; the only thing it’s got going for it is Klingon breasts and those get old fast. Wisen up or give me the lowdown why you can’t.

I will admit that Deep Space Nine got off to a slow start, but it did pick up after they incorporated more action. Something its unofficial sibling show Babylon 5 didn’t necessarily need.

I’ve never written feedback mail to anything, authors, TV shows or comic books, but I am familiar with the feeling of entitlement many nerds/geeks have that something they plan on engaging with regularly and hope to fall in love with should immediately satisfy their every whim and desire. It’s usually not a good look. 🙄