About two weeks ago, a friend and I were enjoying a moderately sunny, moderately warm day on the National Mall after brunch and after lazing about a little bit at the National Gallery of Art’s Sculpture Garden, it came up that he’d never visited the National Archives. So we toddled on over and saw that it didn’t have a line — which is pretty rare. 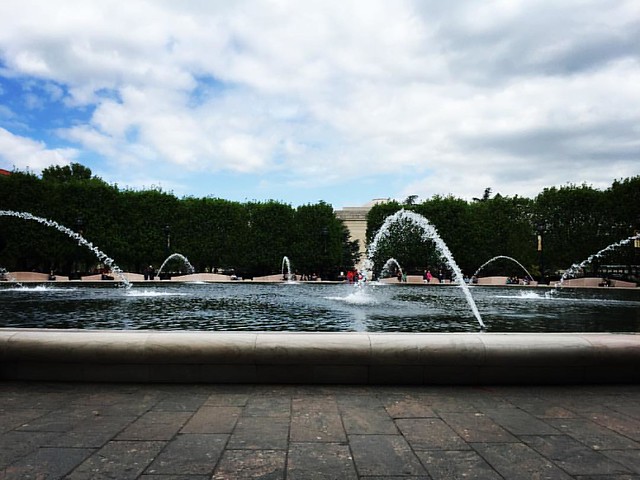 It was crowded, however, which is not so rare. We didn’t quite make it into the Rotunda with the big draw documents, but we did get to see one of the new permanent exhibits “Records of Rights” containing records and documents from the Archives about “the ongoing struggle of Americans to define, attain, and protect their rights.”

Much of it is enlightening, saddening and frustrating, even with the victories along the way, but in a section on “Mobilizing Wartime Women” was a hilarious — even given its time — pamphlet issued by the United States Department of War on April 1 (of all days), 1943.

The inclosed pamphlet will be of interest to you. It is another step in the War Department’s continuing effort to increase its employment of women and to guide our officers in adapting women to industrial work.

It isn’t part of the online exhibit, but you can see and download it in the Archives’ online records.

Thankfully, it doesn’t “read like stereo instructions,” but tries to act as a cheat sheet or flash cards to help male (one assumes) hiring managers understand how to hire and accommodate women in the workplace. Some gems…

When Hiring Women: Favor (all else equal) the local resident without small children or infirm dependents.

When Training Women: Relate her job training to past experience, usually domestic–interpret machinery operation in terms of household and kitchen appliances.

When Supervising Women: Let her know when she is doing a good job.

Use a Trained Personnel Woman: She can be told personal difficulties that would not be confided to a man.

Women can be trained to do almost any job you’ve got.

Remember… A WOMAN WORKER is not a man; in many jobs she is a substitute–like plastics instead of metal–she has special characteristics that lend themselves to new and sometimes much superior uses.

I feel like “You’re Going to Employ Women” should have followed up with another step-by-step pamphlet titled, “What Are Women?” with the eventual conclusion of, “…we just don’t know!”

The entire exhibit is really well done with the usual audio/visual and interactive flair of modern museum exhibits and worth a visit. But weeks later, I’m still grinning about that pamphlet. I shared “You’re Going to Employ Women” with some of my women colleagues and we all had a good laugh about it for the rest of the day.

Here’s hoping your Hump Day1 is a good one!