How many bits could a Fitbit fit…?

So this is weird. I’m out of the cult. I’m no longer a member of the club. I feel as though I have been shunned. Outcast, if you will. 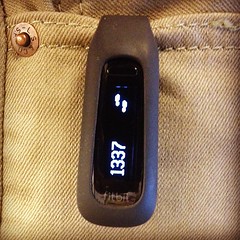 My Fitbit is broken. The little device will no longer hold a charge without performing “device resets” every time. And not even the official one, but a sort of hack one where you stop trying to reset it the moment it turns back on instead of waiting the 10-12 seconds. It doesn’t matter since at any given moment in the next 24 hours, it stops responding and I have to go through it all over again.

Fitbit customer service is clearly instructed not to tell a customer their device is broken. I’ve been given the same support steps repeatedly while asking them about the device end of life and average battery life and even if they have a refurbished/reconditioned store where I could get a replacement. They ignore my queries and advise me to go through the support steps again and “let us know how it goes”.

I have the Fitbit One, likely $100 new or maybe $30-50 used on eBay and I’m torn about replacing it. Do I still need an activity tracker? I’ve been a Fitbit user since near when they started and I won’t deny that it’s been fun and motivating, but at what point does one “graduate” per se? When I use food tracking apps, I don’t stick to them because after they give me a good idea of what my food intake it like, I sort of internalize that knowledge and move on. Has that happened with my Fitbit?

I take walks during the work day, I dance around the house waiting for food to cook, I consciously take extra trips up and down the stairs in my duplex and when it’s nice outside, I get a good long morning walk in on the weekends. Until a few days ago, all of this was dutifully tracked, logged, shared and posted by the activity tracker. Steps posted to a leaderboard, general calorie burn crossposted to other fitness apps, average walking distances compared with cities, countries and landmarks around the world, etc. But to what end? 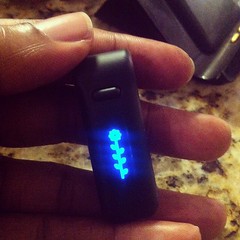 I admit that maybe without an activity tracker I wouldn’t have logged exactly 12,000+ steps a day or walked/moved the equivalient of 6 miles each day. But by now I know the distance between various spots around the city and I have other apps that would track it. Even my phone has a rough activity tracker in it by now. I think I’m trying to convince myself I don’t need one, but I also admit that I sort of miss it.

I talked to a co-worker about it and the immediate reaction was “You just gotta replace it, man!” I look around on my daily tos and fros and see the wrist-worn trackers on everyone whether Fitbit or some other company/device. Are those people benefitting from them? Is that data just tracked for their idle curiosity? (And being uploaded to some nefariously shady server somewhere?) I dunno.

DC is slowly riding out a weirdly unpredictable weather’y Winter and coming into Spring which means I’ll have reason to get out and about more and I think I’ll go “natural” for a while and see what happens. Sure, an activity tracker played a part in my weight loss and fitness, but I feel like I know myself enough to maintain the habits without the tracker… I think.