A small group of Bay Area residents who made an informal vow to not buy anything new in 2006 have found themselves in the middle of an international fury over consumerism, ecology and middle-class hypocrisy that has spread around the world in just days. 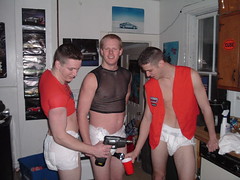 Great idea.. I know I couldn’t do it. At least I don’t think I could. I know I’ve gone months at a time with those same “rules” only food/health & safety/underclothes. But I think that’s more from being broke or deciding that money will go to bills/debt/rent only aside from the basics. Still, could be interesting to inject a little more bohemian into my urban for a little while… But maybe next year. 🙂

After reading a bit (and having some more tea), it looks like they are buying used or second-hand items, so that seems a little bit more attainable, methinks. Definitely an interesting concept.

* The picture of guys in diapers with powertools has nothing at all to do with this entry… I just thought they looked cute. Strange and weird, sure… but cute.