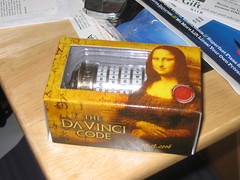 Ah contests, such fun especially when you don’t really have to do much aside from go to a website every day. Google was running a promotional tie-in with The Da Vinci Code, where you had to solve 24 puzzles and the first 10,000 entrants get a replica Cryptex from the film which has another clue on the inside of it leading people to the next phase of the contest.

I’m not really a lightning fast puzzle solving person, considering that I usually did them at the office during the day, so it was like the day’s sudoku replacement for me, and something to talk to Jack about as we were both in the contest.

Still, this thing is a nice prop replica, real metal, heavy, works as it should, even if I don’t manage to be the grand prize winner, I’m pleased with it. Hell, I might even see the movie!