One of my favorite internet radio stations, Gaydar Radio has started charging: Due to a change in United Kingdom licensing laws all Internet radio stations now have to pay to broadcast outside the UK. Poop. What was more annoying is that they didn’t mention how much they had to charge ’til you’d gone through the registration process, waited for your password to be mailed to you and then tried to listen. Only then does it say “you’re not a paid subscriber” and tell you how much it costs ($9.95/mo). I like my dance tunes and all, but I’ll just read the playlists from now on and find the tunes on my own. And I have other online stations to listen to for when I’m tired of the iPod (or more specifically the earphones). 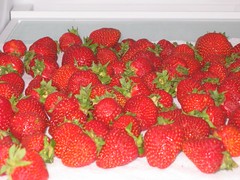 But on the bright side, the DOT Farmers Market was yesterday and I got some lovely tomatoes and gorgeous strawberries (not pictured). Now I’m just not sure yet what to do with them. Perhaps some sorbet and then snacking on the rest of them. If I can find a recipe for strawberry cheesecake that uses actual strawberries in more than a glaze on top, that would be nice. And the tomatoes are so getting turned into fresh salsa this weekend. I’ve been craving that for a while, and it’s a nice low-cal treat.

I also beefed up my PC with a 500 gig internal hard drive, so now Windows can stop whining at me that my Dr. Who episodes are taking up too much room, and maybe I’ll put my music over there from the mac. Not that I don’t love my mini, but frankly it doesn’t have the memory to run iTunes when my library’s got nearly 20,000 songs in it. It drags the whole system down to an eventual standstill. Not that I’ll get rid of little Marvin, but I might have to buy him a sibling in a new MacBook.

I was re-watching a little 9th Doctor while playing WoW last night, revisiting the wibbly moments from that season that made me get all teary-eyed. I also joined a guild in WoW, I was adventuring and this N.Elf Hunter joined me and we were having a good time in combat and in RP and it was the first Guild invite I’ve had that wasn’t random and came from someone well spoken and very kind, so we’ll see how well that goes. I had kept hope alive to join the Guild