Slave to the bean 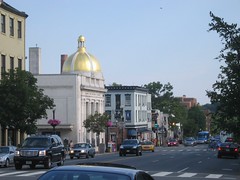 I’m starting to feel totally unable to cope with the workday morning without caffeine. But I suspect that it’s psychological because I don’t feel much of a buzz (except on espresso) with it and I don’t feel much of a physical low without it, I just don’t feel right unless I get a hot or iced coffee, and lately it can’t be some crappy syrup mixed with hot water from a dispenser, it must be brewed. Ah well, it’s probably time to start bringing in coffee and creamer of my own again. But the office coffeemaker reminds us all why we hate roommates. “Who was the last to make coffee? The pot needs to be washed out. Why didn’t you make enough for everyone? I hate this flavor. Who’s turn is it to buy cream and sugar?” — and so on.

Dinner was good, but I’m getting a little tired of going to pizza places that are so concerned about wood burning stove and rough chopped/fresh toppings and rustic pizzas that when it does arrive at your table, it looks great, but you try to pick up a slice and usually all you wind up with is a bit of crust as everything else has slid right off back onto the plate. I don’t mind being civilized and eating pizza with a knife and fork, but I don’t want the reason to be that all my toppings have turned into a lettuce-less salad form of meats and cheeses on the plate, abandoning the crust entirely. Still the conversation was good, more involved than usually happens in group dinners.

After dinner we walked over to the theater to catch the movie, unfortunately while we had plenty of time to make our seats, the showtime we’d planned on wasn’t on the marquee. We asked the box office cashier about it and she kinda shrugged, I don’t recall hearing her say that it was sold out, but I wasn’t close enough and wasn’t really paying attention. We talked to the manager who let us know that the entire house had been bought for that particular time and there were no seats available.

La tante and BFF did what you’d normally expect of disappointed movie goers in Georgetown, going through the standard phases of, “we’ve come all this way,” “we had no way of knowing,” “you’ve done nothing to inform people,” (that one was my major beef) and eventually, “so what are you going to do for us?” Which I can’t help but thinking was a little inappropriate since if we’d gone in and they’d said it was sold out, it wouldn’t even occur to us to ask for some kind of compensation. Even so, the compensation was pretty poor, coupons for free small sodas. However he did check the listings and let us know where else we could try and catch the show, something that I’ve never had a manager offer to do in the past. Lucky for us we were able to head over to Shirlington and grab some seats just as the movie was beginning — skipped the commercials AND the previews.. *boo-yah!

There’s been plenty said about the film, and I won’t rehash it, but it’s good. Even if you’re one of the people that thinks global warming and the effects are a theory, this will at least give you information to try to refute and hopefully through research realize that just maybe you can’t. Though I’m guessing that most people going to see this movie are believers, they just may not have realized the scope of the problem. Since it is a movie, there were a few spots that showed Al Gore, the human being that could be interepreted as ego boosting, image polishing, or both. But even with a healthy sense of skepticism about the method, the message was pretty on point. And most interesting to me was how the U.S. lags so far behind the rest of the world in environmental stewardship because it isn’t popular or desirable, and everytime I see an average height man struggling to get down from his Hummer, I start to know how the crying Indian character felt. (RIP Iron Eyes Cody) If it’s playing near you, I’d definitely recommend seeing it. And if it isn’t, the website climatecrisis.net has some of the scientific facts/observations as well.

Looking forward to Happy Hour tonight… quittin’ time can not come too soon!