— Douglas Adams, “The Restaurant at the End of the Universe”

Hopefully The Lord also knows that I’m not a fussy customer. I’m quite happy to go through shopping experiences, waiting when there’s a line, accepting disappointing yet politely given news and in general if I get what I expect when I make a purchase, it’s all good. However not all of my experiences are as pleasant, and I am indeed a letter writer. I don’t really care to complain in the store because all that does is hold up other customers who have nothing to do with an establishment giving crap service, so I’ll just write to the manager or higher if necessary, tell them about my experience and hope that they’ll do something about it. I know a lot of people complain just to get free stuff, but honestly I just want what happened to never happen again, to anyone. 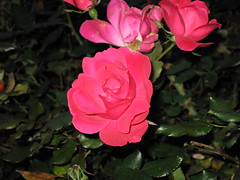 For instance with Starbucks, the first few times I was in there it would take as long as 20 mins for my drink to be served up to me, whether that was the fault of the cashier or barristas, I didn’t care, I just didn’t want it to happen again. So I wrote a letter each time, detailing my experience. And each time I got a free drink certificate in the mail with a letter saying that my concerns would be forwarded to the local manager. While the service has improved since then, they still occasionally suffer from the same problems. I don’t write letters anymore because clearly it didn’t make a difference – they just send out a free drink coupon to shut the customer up. It’s much the same with Peapod or Safeway grocery delivery services, their first reaction to customer complaint is a standard apology plus $5 credit towards the next order. It doesn’t matter if you’re saying the items were broken or missing, or that your driver was late or never showed up at all: “I’m really sorry about that, and I’m going to credit your account $5, ok?” Because that makes it all better and really assuages my doubts that anything will go wrong the next time, right?

Just yesterday I had a little tête-à-tête with Apple. I had the iPod Radio Remote and mine developed a short in the cord, so I figured I’d replace it with a new one. I chose Black Friday to get it online since they’d knocked 11 bucks off the price and I didn’t have to venture into VA or deal with the long ride to Bethesda. I couldn’t tell for certain whether the remote shipped with the new headphones or the old ones. The picture on the site showed the old ones, however other items that I know are shipping with new ones also showed old ones, and I figured if they’re not selling the old ones, why would they ship them out?

The new remote arrived and it had the old headphones with it. I looked on the website to see if I could set up a case for return thinking I could express my displeasure and maybe find out if they were planning to ever include the new headphones with the remote, but I couldn’t do the return online since it was a discounted item. Considering the season, that seems like a really bad policy. So I called them up and tried to speak with a representative about it. After briefly speaking with someone and being put on hold for.. I dunno 15 mins or more — The hold music is like an XM station and I sat through about 5 songs so probably longer — when the woman finally came back and asked me to hold again, I told her I’d have to call back. So I did, 30 seconds later and reached a much more helpful woman who told me that while it was unfortunate, Apple didn’t consider it their error and I’d have to pay to ship the remote back. I asked her if she really thought that was fair considering the unclear information on the site and while she didn’t, it’s still “our policy”. Fine, I said that it wasn’t worth it, I’d keep the remote as I really did want it so to cancel the RMA.

What set me off, and it probably shouldn’t have, but I was in the midst of a gradually sinking day was when I checked my order status online the RMA was still up and the reason for return listed was “Made a mistake” which in my eyes read as a pretty way of saying “customer error.” At that point I fired off an e-mail to customer service through their website asking them to once again cancel the RMA request and that it was a little insulting being made to feel that I made a mistake when they aren’t consistent with product information. 2 or 3 e-mails back and forth (the first one was to tell them that no, I am not writing to ask how to return my purchase and please don’t send me a canned response again) and they relented. While not agreeing that there was anything they could do to make it more clear which headphones are shipping with which products, they said they’d send me a set of the newer ones at their expense.

It isn’t exactly what I wanted, but it’ll do. I wasn’t trying to get a free set of headphones just to know if they’d be making a version with the shorter cord and packaging it with the remote. I just found it silly that if they’re making a big stink about how much improved the new headphones are, why should they expect that a customer would order an item thinking they’d get the old ones?

I think it’s time to buy one of these shirts, except that it doesn’t have the same effect when shopping online. I also think I’ve used up all my words for the day in this entry. Though I will make just the one comment on the day’s headlines. Doesn’t Michael Richards claiming that he’s Jewish even though he’s done anti-semitic humor before sound a lot like the Seinfeld episode “Yada Yada” where Jerry’s dentist converts to Judaism for the jokes?