It’s not all Jam and Jerusalem, you know…

First off even though I’m not the most health nutty.. actually health nutty is probably the best term to describe me as I will get rather insane and crazy about what I consider eating well, but I’m getting off-point — when I see a new drink advertised with big pictures of fruit on the front, it amuses me to no end to turn the bottle around and see “Contains 10% Juice” or similar on the back. It’s like I expect to hold it up and see a little break line like a well mixed back o’ the spoon drink, the lower 10% being good juice and the rest … other stuff. Today’s find: Dole Sparklers, Bubbling with Personality! (just not much actual fruit juice) 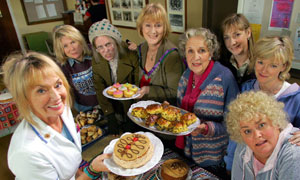 While watching either Spoons or Look Around You on BBC America this Saturday I saw a commercial for a BBC America exclusive show Clatterford starring Jennifer Saunders and Dawn French among others. Knowing that nearly nothing gets to BBCA without having been loved on BBC in the UK first, I hit the internet and found that the show, née Jam & Jerusalem, had already run for a season plus a Christmas special and I just happened to stumble across the episodes, honestly no idea how they managed to find their way onto my mac converted in just the right format for watching on my TiVo unit.

In their last French and Saunders series, the ladies’ premise was that the BBC were paying them to do yet another series while they had only wanted to create a production company so that they “could write stuff for other people,” and could “mainly be at home.” Jam & Jerusalem definitely sets them in the background, they provide a bit of comic relief and color (colour?) but are not the main characters. There’s also a nearly unrecognizable Joanna Lumley as the ancient and wrinkled church organist, the series is a who’s who of women in British comedy. I’m glad I got the BBC feeds as they’re 30 mins, no commercials of course. When BBC America shows the same episodes, instead of taking 40 mins with commercials as they used to, they simply cut out bits. They choose good parts to edit out, of course, but when I watched Look Around You, I definitely missed them — mostly because they cut out a lot of the campier/queer references.

I’m looking forward to finishing up the series, and seeing last night’s Battlestar Galactica and tonight’s premiere of The Riches, though I might just wait until tomorrow to watch that so I can get some more cleaning up done tonight. I suppose I should finish Torchwood at some point, but honestly, it just lost me about the 2nd or 3rd episode. I can’t wait for the new Who tho!