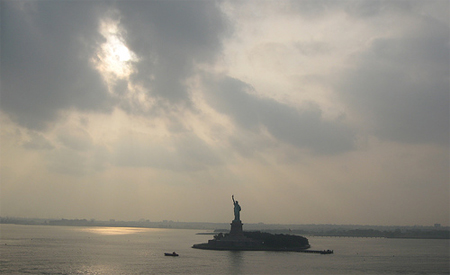 Now calm down everyone, I’ll get to all of your questions in a few minutes. 😛 I had a very good time, but strangely enough I’m really glad to be home. I don’t know when the homesickness hit me, but around that last full day at sea, I was really ready to be back in my own space. But this post isn’t really supposed to be about the end of the vacation, I planned to do a post for each day, possibly each day of this week, but I doubt it will take me that long. I did take the laptop with me and I pondered blogging from the ship, or at least writing up some entries, but honestly I couldn’t be bothered to whip it out. The ship did have wifi and an internet lounge, but I was on vacation damnit!

Unfortunately I had late Friday evening and Saturday all to myself, I’d have much rather been hanging out with people, going for farewell drinks or some such, especially on Saturday, but I didn’t hear from anyone. Actually, I didn’t really get many local bon voyage wishes, mostly via IM and text message, which was appreciated. Sunday afternoon, Michael picked me up and we spent the day in Columbia since the plan was an early breakfast with his friends Cathy and Paul on Monday morning, then driving up to NYC. The drive was surprisingly effortless, traffic was a breeze, we made it up to New York in maybe 3.5-4 hours, stopping once for potty break and a Starbucks run.

Even driving in the city was pretty easy, though Michael immediately tensed up. I think many people have the same reaction when they think of driving in NYC. The directions provided by Carnival were straightforward and we were at the pier and schlepping towards the ship before we knew it.

I’ve seen large floating things before, but our parking spot was pretty close to the ship and it just looked HUGE. In retrospect, not as large as some freighters and aircraft carriers I’ve been near, but I wasn’t going to spend a week on those. Michael was pretty much my Sherpa guide as he’d been on a cruise before, I didn’t really know what to do or where to go, so I was following his lead. I handed off my large bag to a pretty surly looking baggage agent and we headed into the terminal and we waited in more of a mob than a line.. and waited.. and waited. I was fielding text messages and phone calls while waiting for us to make any sort of progress. Eventually they turned the mob into a somewhat orderly line and we flashed our ID and boarding passes and went through security to… yet another set of lines, these divided up by our cabin numbers. We lucked out and got to an agent fairly quickly where we had to check in, get our “Sail & Sign” cards and give them our credit card info so we could be charged for every thing purchased on board at the end of the trip. From there it was on to another line where we got our photos taken and applied to our Sail & Sign card and then we were let onto the gangway to board the ship.

It was gorgeous on the inside, seemed to be really big, green and blue hues dominated the decor. The “sea” theme was pretty prevalent. From the lobby/entry, there was a sort of atrium with 2 levels up via spiral staircases, glass elevators, polished wood and brass everywhere. It was definitely the kind of place I could spend a week. 🙂 Our cabin was small, there’s no disputing that, but with the balcony outside, it didn’t really matter. Plus, it’s like Vegas, no one really wants to spend all their time in their room! After settling in a bit, we partook of the buffet and took a stroll around the ship, making sure to head up on deck for setting sail from New York. The weather could have been a lot better for us but we could still see a lot of the city and landmarks, I think I got a really nice shot of the Statue of Liberty as we passed. It was just nice to be outside, nice breeze, water streaming by as we watched bit by bit of New York pass by and fade out of sight.

That evening we steered clear of most of the activities, just preferring to relax a bit before dinner. I was a bit worried about sharing a dinner table with strangers, but it turns out we were paired at a table for four, with a gay couple. I think someone was paying attention to genders, addresses and last names when planning the dinner seating, Jamie and Michael were a lot of fun and it was great to start making friends on-board. We did stroll by for the “Friends of Dorothy” meet-up, but it wasn’t well attended. Later, after meeting more gay couples on-board, we’d find out that nearly no one even knew what Friends of Dorothy meant!

After peeking in on the comedy show, we decided to pass on it and headed back to the room for a bit — then I had to sneak out for a little late-night bistro action. Sadly, a weigh-in shows that I have gained four pounds this past week. 🙁 But our first day at sea was a fun one!