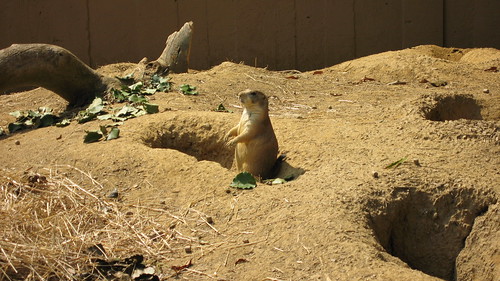 I did it just like anyone else would, with lots and lots of shopping!

I was good this morning, I got up early and took a good long walk through the zoo. The scenery may be the same, but it feels good to have a nice bit of sweat that you earned instead of merely received. I may try to squeeze in a walk every other day and it’s nearly 3 miles from my place, through the zoo and back. If I were still working at home, I’d probably do it every other morning or afternoon. Unfortunately even though the zoo opens at 6 before October, there just wouldn’t be enough time to do that and make it to the office via metro. I’m not about to get a gym membership just to have a shower near the office when I know I wouldn’t go otherwise.

Gregory and I had a good little suburban shopping run today. The old mall at Silver Spring kinda scares me, but we got some deals at Burlington Coat Factory (Kenneth Cole long sleeved tee for $5!) and then headed over to Ross, Marshall’s and Target. I brought home some more goodies and had a bit of a fight with a faucet mounted PUR water filter. I lost, so it’s going back. Apparently they don’t work so well when you’ve got a slightly tilted over faucet ending. I shoulda stuck with my original idea of getting a Brita pitcher and filter refills, but I was suckered in by having filtered water right from the tap… ah well.

This week isn’t looking very interesting: work, dry cleaning, laundry, grocery shopping, zoo walk(s), returns trip to Target. I really need to try to catch up on my Netflix movies as well. I watched Blades of Glory the other night and I’m sorry I missed it in the theaters. It may have been typical Will Ferrell, but it was pretty funny. Speaking of funny, Justin has been trying to get me to watch this Daily Show clip for a while now and I finally got around to it tonight. Political Correspondent John Oliver (who’s so cute, but maybe it’s just the accent) weighed in on Bob Allen’s arrest, and other possible alibi’s he could have come up with…