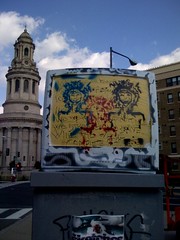 Wow, I got nothing. This is definitely going to be one of those “stuff happened” entries as just about all that’s gone on today was I had too much coffee (for which I had good service again) this morning and started to feel a little nauseous. I know believe I now know my limits when it comes to the bean.

Last night I did something that’s been unheard of for months: I watched Netflix movies!

I really enjoyed “Dr. Strange,” another in the Marvel animated family. The story was a little bit scattered and it was hard to tell if they were trying to portray “Ultimate Dr. Strange” or the Earth-616 version or a mix of the two. The familiar origin story was handled very well, but the resolution seemed to be over really quickly. It’s ripe for a sequel, as all of the movie-toons have been, I just hope when they come out with one that it’s better than the Avengers one. On the DVD extras they also had a preview for “Avengers Reborn” which looks like a version of Young Avengers mixed with the Saturday morning version of Legion of Super Heroes. I don’t really understand why people feel that for a product to appeal to kids, it has to contain kids as the protagonists no matter how far-fetched the premise might be.

I also watched “Maxed Out” which didn’t hold my attention as well as similar movies have. I think that maybe the problem its covering is such an obvious one that is shared by so many people that there was hardly a reason to film a movie from the perspective they did. It wasn’t like watching “Sicko” or “Who Killed the Electric Car?”, and it didn’t feel as educational, it was kinda boring. But I think most people’s awareness of the credit industry, the pitfalls and the loopholes are pretty high right now. If I’d seen this movie about 15 years ago, it would have had much more of an impact.

So I’m finally rotating the queue again, I also sent in my video games from GameFly. Hopefully I can get back into the swing of this, especially as the WGA strike looms. However I’m conflicted on that, on the one hand networks are producing more and more “un-scripted” programming, but on the other side of that is anything that might make people watch less TV a bad thing?