My daily dose of geekness and a quick chuckle from today’s Shortpacked!. 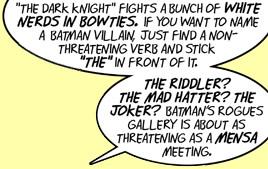 This is the counter-argument after Spider-Man’s villains have been compared to Sci-Fi* Channel Original Movies**. Gotta admit that was a pretty true statement for a long time until comic writers decided to start “gritting up” their heroes and villains. But without that grit, no one would be talking about how apparently awesome Batman: Arkham Asylum is. I’ve already been hooked since I played the demo, I’m just waiting for the stars to align*** to buy it. I’m not really into the shoot ’em up type games, but the first-person sandbox style ones have really hooked me. Especially those like inFAMOUS and [PROTOTYPE] where you’re pretty much a superpowered guy that gets to either follow the game plot or alternatively blow the crap out of everything in sight. 😀

From the number of suitcases on the metro this morning, it looks like a lot of people are starting the holiday weekend early, so TGIF to you if this is your “Friday”. The rest of us working schlubs will hold down the fort ’til Monday. 😉

** Still one of the most terrifying four-word phrases in the English language.