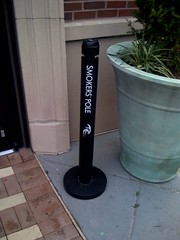 Lordy it was quite the chilled morning out there, but it made for a good walk. For some reason, all the red wine I had last night manifested itself this morning as a nice bright and early wake-up call. Not for any bad reason, just one of those “Ok, I’m awake!” kinda mornings. It ain’t pretty out there, but I made it over to Sticky Fingers to appease a vegan host later this afternoon and a trip back by Starbucks for the morning pick-me-up. Otherwise it feels like a great day to stay or be inside. It looked like it might rain, but the sun is making its way out from behind the cloud cover here and there. Still, with the chilly temps out there, it’ll be a good day to be inside for a little get-together.

MySims from GameFly lasted all of one evening in my house. I’ve been really disappointed with all of the offerings for the Wii that I’ve rented. None of them share both the fun and simplicity of Wii Sports, some of them are downright complicated for what seems like no reason. MySims suffered from constant “Loading…” screens between every single doorway. Alien Syndrome had the oddest mini-games for an RPG. Even the Brunswick bowling game, which could have been a nicely souped up version of Wii Sports Bowling, suffered from a lack of synchronization between your movements and the on-screen character. I feel like it makes me an old fuddy-duddy when it comes to console gaming, but I don’t get into FPS or twitch, I just want some fun games darn it! 😉 And that game where you use the wii remote like a rifle and make the motions of striking someone across the face with it? Yeah that is so not for me.