Small Claims Court is boring. I thought I’d be nervous or annoyed but no, just bored. I’ve learned my lesson though. All my outstanding debts are getting paid off ASAP! Even though the majority of people I encountered today were polite, no one should ever have to waste hours of their day going through that.

This process is so DC. You show up early, as requested, and no one’s ready for you. Nor does anyone seem to know where you should go. You just sit and wait. Eventually someone asks you what you’re doing there and tells you to go somewhere else to stand and wait. I confirmed that my case was on the docket and I waited… Eventually all plaintiffs and defendants were called into court and they started roll call. After tons of cases where defendants didn’t even show up, the parties that were present went to mediation, which is where I’m waiting now. 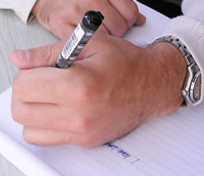 Ok that wasn’t so bad, the lawyer for the firm representing Capital One was very nice, and a lefty. So I traded stories of my mother’s “lefty ink smudge” as he had one too. I don’t think he was expecting me to be so cordial, and I admit that I know how it can throw someone when I’m firm, while still remaining extremely cooperative. I mean I do owe them the money and I’m tired of being in debt, so he was willing to waive his legal fees, and when he found out that I was prepared to pay a lump sum we were able to renegotiate the amount to a much lower settlement. It’s like Donald Trump has said about lenders and creditors, they really just want to be paid, not constantly hound you about money.

I think he was just surprised by my attitude, my willingness to pay the debt, everything. And that’s a good thing. It was a pretty fascinating experience, all told, not that I’d want to do it again, but it’s cool to see how the process works. It is *so* not like People’s Court or Judge Judy or like hiring a fraud attorney and I’m sure my case wouldn’t be considered for television like trying to counter drunk driving lawyers in Fresno… anyway, quite dull and boring. I think that a good number of the cases were credit card companies, there were also small medical firms, quite a few anesthesiology businesses listed in the Health Career Explorer and a few people vs the District of Columbia. I didn’t hear any cases called that sounded like one person taking another to court. Though when I was initially in line to see the clerk, there were a few people filing papers against other individuals. And there was one guy immediately asking to see a supervisor as he said his wages and bank account were garnished without him getting any notice — possibly due to the woman doing it having a friend at the DC Courts. I kinda wished I could have stuck around to see how that was resolved.

I got there at 8:15a, sat in court at 9 and spoke with the lawyer by about 10:15, so not a fast process, but for the most part a painless one. I even joked that it wasn’t long enough to take the rest of the day off work! When I got back to the office, having finally gotten my day’s caffeine, a co-worker mentioned something about losing a bet. Apparently my manager let him know that I was out that morning, in small claims court, so the joke bet was whether or not I would have been thrown in jail.

Maybe I just have a different idea of professional distance, but I don’t feel that’s information about a co-worker that I would share with another. Honestly most of the time if someone says they have to be out part of the day, I don’t even ask the reason, I just trust that they have a good one. And if it’s for an interview, they’d only come up with a good lie anyway. This is the same co-worker that will speak to me once in the morning and based on that, decide whether I’m having a good or a bad day. Not whether what he’s talking about is important or irrelevant, but based on whether I’ll humor him.

Needless to say, I miss having cube walls. I never thought I’d ever say I missed cubicles, but in these new workspaces, there really isn’t enough physical distance between people to develop the proper professional distance one should be allowed to have in an office. That, however, is a rant for another time. 😀