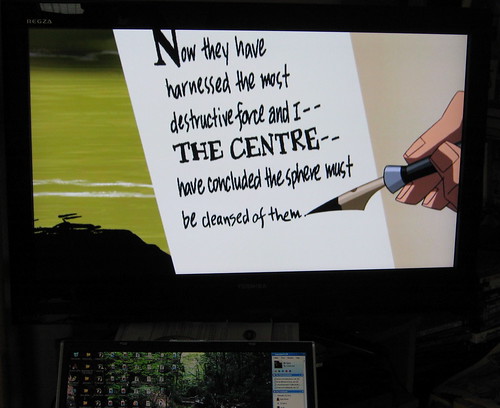 The other picture shows it off better, but I realized there was some schmutz on the tv which I had to clean off. Still, it’s very impressive and goes a long way towards creating one’s home-media empire. I have multiple devices that can access my home network’s music and photos, the internet, incoming cable and Hi-Def signals and play video games to name a few things. The interface for the laptop is nice as the TV just becomes a second monitor, but it’s clunky since I still need multiple cables for video/audio. I’ve seen a VGA/Audio to HDMI adapter but it’s around $180 and I’m still on the fence about buying a new laptop which might already have HDMI output or at least DVI.

The setup I cobbled together works well for now, and this feels more like I’m making the most of out the subscriptions and gadgets that I’ve paid for. I don’t have any plans to start PC gaming on the big screen, but with the right wireless mouse and keyboard, it’s not out of the question. I have been neglecting my PC gaming of late, the allure of Hi-Def is pretty strong and frankly I’ve been bored with the current offerings. I need something new, whether that’s MMO or single-player. A game that is fun, isn’t twitch and that doesn’t make my machine work triple-time to render. I’m well-aware that’s asking a lot but I haven’t picked up anything more than a casual game in a long while. Generally something to play for a few minutes while I organize music or listen to a podcast or to get my brain into sleep mode when up against the wall of insomnia. It turns out firing colored balls into patterns is a lot more mind-numbing than I thought it could be.

Looking forward to a quick workday (hopefully) and the return of our warm (but not hot) temps. They mentioned some areas might see snow today. Snow!? Gah!