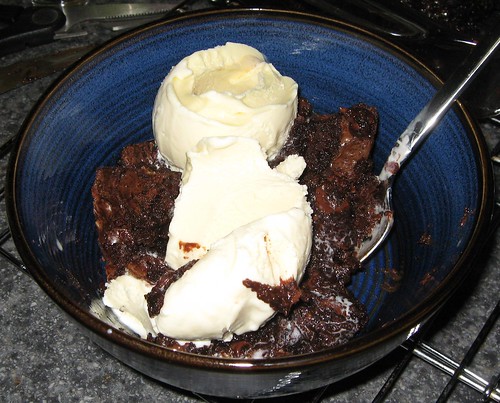 What does one do when they’re feeling moody about an impending birthday? Make brownies, of course! This was really more the result of a kitchen cleanup, I found one packet of brownie mix left, a bag of toffee chips and a ½ bag of chocolate chips. My only option was clear.

The weird thing is I only feel old some of the time, but when those times hit–it ain’t pretty. There was some gorgeous post-storm weather on Saturday night, but I’d been home-bound for so long that day, that I just didn’t feel like heading out at all. I had food, tv and Netflix discs, so why bother heading out? Not that I mind being a homebody on the weekend evenings, but the way it looked outside was coming very close to overcoming my lack of desire to go out alone. But beyond that it was a good weekend.

I got through a little bit of Netflix guilt, watching and returning ‘Mommie Dearest’ & ‘Thundercats’ of all things. Also watched some more episodes of ‘Corner Gas’ (including the one that introduced the concept of a stay-cation) and the entire series of ‘The Life and Loves of a She-Devil’ the BBC mini series from the 80s that was based off of the same book as Roseanne’s film ‘She-Devil’. It’s clear the film took direct inspiration from the mini-series, except that the televised series was much deeper and not all that much of a comedy. I also subjected myself to a wee bit of torture by reading Marvel Apes #1, but I was able to step back from the abyss by also getting through the collected stories in Superman and the Legion of Super-Heroes. I have a hard time keeping up with comics as much these days, but that Superman/LSH story was brilliant, touching on very old-school themes with a modern day twist and a very common sci-fi “Earth for Humans” theme.

Time to arm myself with a latte and a croissant and face the Monday! 🙄