As much as I rant and rave about how Food Network–and most televised food shows, really–has lost their way, it can still be very dangerous for me to watch it on an early weekend morning. Even though her new series format has garnered a lot of ridicule, I can’t help loving Barefoot Contessa’s Ina Garten. The new series is subtitled “back to basics” and she’s revisited some classic recipes and methods, occasionally throwing a twist into them. 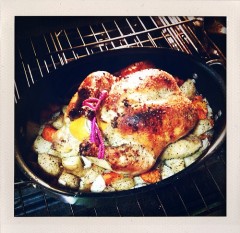 My go-to roast chicken recipe has always been her Lemon and Garlic Roast Chicken, which has the best of intentions but sorta fails the “quick & easy” requirement. Make no mistake, it’s delicious, but draping the bird with bacon, futzing around making a pan sauce… I haven’t minded these things in the past, but now when I thought of roast chicken, my brain would wince.

So I surprised myself when my un-caffeinated brain clicked Play on the episode “Chicken All The Time” since I knew she’d have to roast a chicken. It’s her husband’s favorite, after all! And she did a retake on her 2004 recipe, this time calling it Garlic Roast Chicken and changing it up a bit to create two dishes at once, sort of. It seemed much simpler than her last recipe and the little voice in my head said “Hey, we can do that!”

So one quick trip to the store later and I was setting the bird into a brine. Unlike Alton Brown, I don’t have a lot of coolers, tubs, and bags hanging around, so I had to make do with what I had. I actually wasn’t sure the entire bird would fit into this pitcher, but I lucked out. It did have the unfortunate look of a mad scientist’s “brain in a jar” but these things happen when you’re cooking in a small kitchen! I’m glad I got the urge earlier in the day since the brine would need at least 4 hours to be effective. But then came the waiting. My brain hadn’t really thought to find something else to prepare in the meantime and it was too dang muggy-hot to head outside for anything. Thankfully chores, TV and (mostly) the PS3 answered my need to kill some time.

As I said, it’s fairly simple and very similar to her previous recipe. Cut up the veggies to form the base, rinse the chicken, pat it dry and stuff with the garlic & lemon. Truss it up with a little chicken bondage and place it atop the veggies. Brush with melted butter, I added a bit of minced garlic to the butter too, then season with salt and pepper. All of the above took me no time at all*, and I can only imagine with a sous-chef or semi-kitchen-competent spouse that it would be negligible.

After you’ve admired your handiwork, pop it into a 425° oven for 90 minutes. Feel free to look at it at various points during cooking, but there’s no need to shift it, baste it, turn it, none ‘o that.** And if you’re a fan of garlic, you get the most amazing aromas coming from the oven after barely 10 minutes of cooking. I was tempted to put my little Vornado fan outside the kitchen to better spread the scent to all parts of my apartment.

The chicken wasn’t quite up to the temperature I wanted after 90 minutes, so I put it back in for another 10 then took it off the veggies and covered it with foil to rest. The vegetables went back in to roast uncovered, develop a little more color and reduce/simmer in the juices from the chicken.

Not bad for under $15 at the store! Unfortunately none of the items I was looking for were on sale or that would have knocked it down a bit more. My plating skills have never been the best, so I’ll spare you that photo, but all the pics are up on flickr.

I’m definitely keeping this one in my rotation, being much easier than the last one. The most complicated step is the brine which needs between 4-8 hours depending on your tastes. But it could work for date night just as well as a “prep, travel and cook” recipe if someone you know is having a dinner party.*** Next time I’m thinking of doing just potatoes slices instead of chunks underneath and going for a gratin-less gratin.

I should pick up some more of her books, maybe have my own “Urban & Ina” or “Barefoot & Bohemian”–there’s a script there, I’m tellin’ ya! 🙂

* Well, a little more than no time as I was taking photos and washing hands between each. I really need a camera remote!

*** And is equipped with a bigger kitchen and room to entertain, ‘cos I sure ain’t!