Saturday is usually my lazy day! 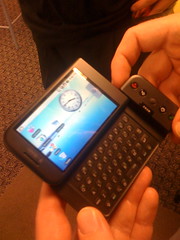 The plan seemed simple enough, get up and out to see the new G1 phone at a T-Mobile location. James was our navigator, so he determined we should head to Pentagon City. I haven’t been to Pentagon City in ages, so was looking forward to a little bit of shopping as well.

Much as I love Metro’s Trip Planner, they were way off on the Green Line yesterday to the point where every train I tried to catch at my home station was early. And I am not usually a metro-runner, but when it’s another 10 or more minutes until the next train, I am about ready to knock people down that are in my way. Made it to Pentagon City, met up with James and headed to the food court. Here’s where I remembered why I so rarely go to the big mall… people. There were so many people, so completely unaware of their own surroundings or anyone else. It’s like that experience of being on the metro and someone, usually a tourist, in front of you just stops moving, maybe they look around gaping-mouthed with a vacant stare. Pentagon City was that same thing, magnified. More than once, there was a clear line of people trying to get to the escalators and the person right in front of us came to a full stop, causing a few seconds of a human-sized traffic jam while they tried to sort out things in their own little world. It’s an escalator, people, it’s not that complicated. 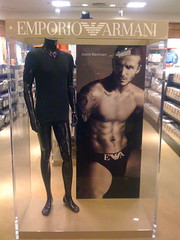 We did get down to a bit of shopping, I was mostly looking for sweaters, preferably cardigans. I joked with Michael as to whether it’s a sign of age when you’re deliberately trying to dress like Mr. Rogers. I just think they’re a better option when you’re in a place like DC that reports temps in the 50s but actually feels more like high 60s once you start walking around. Unfortunately, I didn’t find much of anything I liked. I do prefer zippers over buttons, but you wouldn’t think it would be so hard to find some that walked that fine line between being ridiculously high-fashion and plain-jane boring. I didn’t end up finding much that I wanted, but I sure feel like I hit enough stores. We got sidetracked by other places as well and finally found the T-Mobile “store”. It turned out to be a kiosk that was an authorized reseller, so they didn’t have a demo model. After checking both our phones and Google, we discovered a store a few more metro stops away that did have one and we headed out.

I haven’t really been down to the King Street/Old Town area since I lived in Alexandria and I forgot how much I enjoyed it. Sadly the rain didn’t let up, even getting to really heavy downpours at times, but we did make it to see a G1. I was excited to see one in-person, even though I have no plans to buy one. I suspect James was more knowledgeable than the sales force, but we got some good information. I did–perhaps–make the mistake of taking out my iPhone to snap a picture of it and the sales dude kinda jumped on the opportunity, trying to compare the G1 to my iPhone to the point of almost bashing my mobile, the meanie. 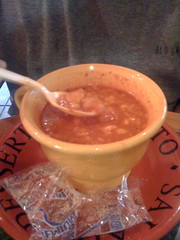 After walking around a bit more, we tried to find some coffee at Misha’s, but it was packed. I love a good coffeehouse, but if there’s never a free seat in one, it’s kinda pointless. And don’t tell me that those people with their papers and laptops are actually studying when the noise of the music and the people were so loud that I could barely ask James whether he felt like trying to stay. We decided to trek back towards the metro, but as the rain picked up we spied another coffeehouse and gave it a try. Uptowner Cafe was a much better choice, quiet, not-crowded, good coffee and good food. While we were in there, the bottom dropped out and the rain was so heavy that the drains failed and the gutters were miniature rivers rushing past. After coffee and a very good soup, we got the heck outta there and hit the metro.

Between the weather and delays, it was not a fun day to use metro, but I did make it back home in plenty of time to get ready to head back out. I’d been invited by someone I didn’t know to a surprise birthday party for a fellow blogger that I’d never even met! I ignored my usual trepidation I’d feel at walking into a situation where I knew zero people and it turned out to be a really good time. Liz turns 26, today actually, and her friends managed to throw her quite a nice surprise party last night at Finn MacCool’s over near Eastern Market. It was a fun night out, she was completely surprised even in the face of some suspicious goings on during the afternoon and evening. It was also fun to associate faces to the names and aliases I’ve read about in her blog. I think I’ve made a new foodie friend in Stephanie and now all I have left to meet is Horatio.

I managed to make it home before I turned into a pumpkin and I am really feeling the effects of being out and about all day yesterday. That’s about the most I’ve gotten out on a Saturday in a long while. This is probably the longest entry I’ve ever made about a Saturday in a while too! I feel like I need to go lie down from all this effort… or maybe that’s just last night’s gin and tonics catching up with me. 😈 I hope everyone’s having a good weekend so far, I think I’m off in search of some coffee or maybe a nap!